The Illegitimate Children of James V

A post on the children of James V, King of Scots, (right) could 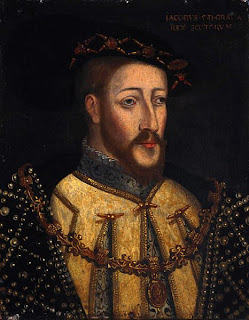 well be expected to focus on his only surviving child, a daughter who became Mary, Queen of Scots, a queen whose name is known by those who know nothing else of Scotland’s history.

His two legitimate sons, James Stewart and Robert Stewart, were born about a year apart and died about a month apart, just after Robert was born, about mid-year in 1541 and just about a year before King James himself died, leaving Mary Queen at the age of six days.

King James no doubt had never expected succession to come down to an infant girl, for although he had only three legitimate heirs, he fathered at least nine children out of wedlock, three of those before he was twenty. Seven of those children were sons.

It is these illegitimate children I write about today.

As with so many Scottish kings, James was crowned while still an infant, at the age of one, just after the death of his father, James IV, in 1513. The tale is told that young James V was encouraged in his debauchery by one of his regents, but to be fair, illegitimate children had long been a royal prerogative, in England and Scotland. Young James came by it honestly. His own father had seven children out of wedlock by four different mistresses.

But James, who became king in his own right at age 16, was able to best his father. And although the identities of some of the mothers of his children are lost to history, some of his mistresses were the daughters of Scottish nobles. Their children were treated accordingly. This meant that several of them played prominent roles in Scottish history and proved problematic to their half sister, Queen Mary.

Five of the illegitimate sons of King James V were named “Priors” as children. This meant they held the five richest livings in the Scottish Church—Holyrood, Kelso, Melrose, Coldingham, and St Andrews. (This did not happen, of course, without the approval of the Pope. James apparently wrote asking his permission for three of his illegitimate sons to receive ecclesiastical positions before 1532, when the boys were still babes.)

I’ve listed the children below. Don’t worry if you get confused. Three are named James, their father’s name; two are named Robert.

James Stewart, Abbot of Kelso and Melrose. Perhaps born as early as 1529, when his father was 17, James was the son of Elizabeth Shaw “of Sauchie.” He died before age 30.

John Stewart, Lord Darnley. Born 1531/32, before James V was 20, he was reported to be the son of Elizabeth, daughter of Sir John Carmichael, a woman two years younger than he. John lived to be barely 32, but long enough to be active in the Scottish Reformation, to marry, and to have children.

James Stewart, Earl of Moray and Mar. James (shown here) was also born somewhere between 1531 and 1533, but his mother was Margaret, daughter of the 4th Lord Erskin 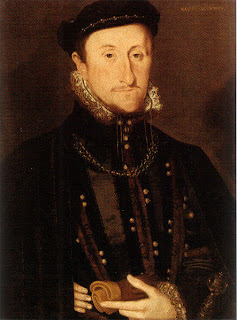 e who was his father’s favorite mistress. (There were even rumors King James thought to marry Margaret Erskine.) He went on to become the most powerful of James’ illegitimate children. A stanch Protestant, he remained close to his half-sister Queen Mary until she married Henry Stuart, a Catholic. (According to some counts, the earl “changed sides” five times during her reign.)
After her death, however, he was Regent for young James VI, his nephew, who later became James I, uniting England and Scotland under one king. The Earl was shot in 1570, before the age of 50, by a supporter of Queen Mary, the first recorded assassination by a firearm.

Robert, Earl of Orkney. Born in 1533, Robert’s mother, Euphemia, was daughter of Lord Elphinstone, and also granted livings from the church, both before and after the Reformation. King James VI re-created the title Earl of Orkney for him in 1581, when he was approaching fifty.

Adam Stewart. Also the son of an earl’s daughter and a prior of the church. He is reported to have married and died in 1606.

Jean Stewart. This daughter married (and subsequently divorced for desertion) Archibald Campell, the 5th earl of Argyll.
T
hree other children recorded are: James Stewart (another one), Robert Stewart, also a Prior, and Margaret Stewart. Two of these are of “unknown” mothers.

Had King James had half the number of healthy legitimate heirs, history might have been very different.

Blythe Gifford has written five, 14th century medieval romances for Harlequin Historicals featuring characters born on the wrong side of the royal blanket, most recently HIS BORDER BRIDE. The Chicago Tribune called her work "the perfect balance between history and romance." She is working on her next book, which will again be set on the Scottish Borders.
Blythe Gifford at 9:00 AM
Share
‹
›
Home
View web version