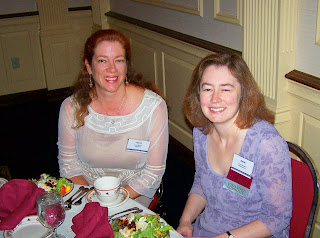 Lisa Yarde can write about Friday night (hey Lisa! hope you're feeling better) because I missed the entire thing.

The next panel was "Rewriting the Role of Women" with Suzanne Adair, Irene Burgess, Susanne Dunlap, Sandra Gulland, moderated by Mary Sharratt. Again, they mentioned this Red Tent by Anita Diamant that Irene mentioned--Irene recommended being like that author and going on a two-year promotional signing tour, something that shut the room up immediately because it's clearly not practical for most of us. Irene Burgess, a professor of women's studies, mentioned a lot of historical heroines who seem anachronistic to readers really aren't. A lot of this comes from a lack of understanding. In the 20thC we created a lot of behaviors that were already present in women for centuries. Sandra says she got a lot of her historical information from midwifery guides. Josephine went into early menopause and was crying all the time, had intense migraines. Oops, it appears I didn't take all that many notes during that panel. I had to run to the group book-signing where I purchased Jeanne Mackin's novel about Maggie Fox, the "founder" of modern Spiritualism. To me, that's the fun part of a group signing--purchasing the other author's books and talking to them. Diana Gabaldon and Bernard Cornwell signed the entire two hours, and had lines going around the pool.

That night was a delicious banquet--the "Feast" part of "Feast 'n' Fun"--Diana Gabaldon (the "'n Fun" part) said it was the best conference food she'd ever had. She told a story about her road to publication that I think left most of us functionally depressed. She was a mother of two working at a university, apparently the world's only expert at writing bird programs in FORTRAN (or something of that nature). She realized she was almost 35 so had better start on this novel she'd always wanted to do. She doesn't write in a linear fashion; apparently she writes in chunks and pieces them all together later like a puzzle (yes, she does wind up with chunks that won't fit, and those all go into a separate file). Someone in her compuserve group said he'd recommend her to his agent. A very short story ensued: the agent took her on and within three days had five offers. And the book wasn't even finished yet. The end. Imagine three hundred people gaping, slack-jawed, in awe and stupefaction.

Sunday morning the first panel was "Bringing Pirates to Life," with my pirate editor Cindy Vallar, and Jim Nelson. Jim believes it's OK to use secondary source material to get an overall idea of your big picture, but you must use primary sources for the details of what happens to one guy. He is amused at our fascination with pirates. It's as though in 2020 we will all dress up like gangbangers, because in the interim they've gained an aura of coolness. But pirates ran the show back then. They were mostly in warm areas because they could fall down, pass out drunk, and not die: that was good.

In the 16th and 17thC pirates all emerged from geopolitical struggles. In the early 1600s the French moved into Hispaniola (now Haiti). They were savage woodsmen. Smoking meat over a fire called a "boucan" led to their moniker of "buccaneers," a term you should never use for anyone other than Caribbean pirates of this era. Soldiers eradicated the buccaneers and drove them to Tortuga. Now they became a large cadre who hated the Spanish. Cindy discussed a lot of technical details I didn't take notes on, since it’s all fresh in my memory from having just written a pirate book. One thing I didn't know is they always wore striped stockings. She did mention she's not big on the nautical details, and was recently stumped working on some gal's big "storm at sea" scene since she didn't know 90% of the technical stuff. I'm going to get her for that. Later. Beforehand I made her promise not to call on me, but forgot to make her promise not to TALK about me.

Next up was the Sitting Room Only "Writing Love Scenes: How Much Sex is Too Much?" with Diana Gabaldon, Chris (C.C.) Humphreys, and Jade Lee. Diana said her books have been categorized as everything from horror to Gay/Lesbian. Jade Lee said being a romance writer, she's seen it all. She wanted people to remember that in romance, there are different ways of rating how sexy a book is. There are chili peppers, HOT/BURNING scales, etc. Homoerotic stuff is also very hot right now, even though she doesn't understand why. (I do.) Diana said the female idea of how two men are together isn't accurate. We make it all tender and kissy, and that's not how guys really do it. Diana read aloud a homoerotic scene from one of her Lord John books that concluded with a hearty, "Yes, I AM a nasty beast."

Jade mentioned how big Ellora's Cave is, for those not familiar with it. Some of those women make $10k per month, "IF you are able to do it." (I think I know what she meant--I am physically incapable of writing a pure erotica. I wish I could!) When she first started out, she received rejections for being "too hot." Nowadays, she has to take "erotic" out of her press literature because now, though she hasn't changed, her writing is relatively mild. Now she's only three chili peppers. Chris opined that he wants to see more thigh boots of the sort he uses in his Jack Absolute novels.

For Diana, a sex scene should show emotional intimacy between two people. People were appalled when, in her later books, she depicted people in their 50s having sex. "Oh my god!" But she wanted to tell a story about how to maintain a long-lasting close supportive marriage, the story of what makes two people stay married for fifty years. Sex is integral, it's a power issue in marriages; sex heals after stress and loss. Sex must further the plot. Chris thinks you should show something different in a sex scene that demonstrates a fresh aspect of a character. For instance, show the same soldier being tied up in the same way, but this time whipped by dwarves. In romance, said Jade, each sex scene is a plot point. The first plot point is the first kiss, then at least one sexus interruptus, and so on. Each publisher has different requirements. Once she was told by an editor not to stress the required three orgasm scenes, to just phone them in. Chris thinks men are more restrained when writing sex scenes, unless they're going for the "throbbing blue veiners." They’re more restrained for fear of offending. Then I had to leave because my feet were killing me. Another two years until the next HNS conference!
Posted by Karen Mercury at 11:04 AM