The Albany -- The Seventh Heaven of Bachelorhood

"Peeping out on Piccadilly through a courtyard as old as itself
is a dignified Mansion whose red-brick and stone front is as
much a landmark as the Circus close by. Albany is its name,
and it might be Arcady for all that countless thousands
who daily pass it a few yards distant know."
~ Harry Furniss, "Paradise in Piccadilly" 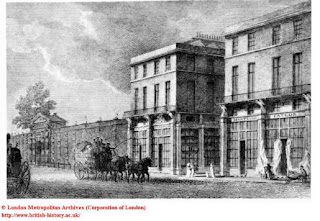 I researched the Albany, one of the first apartment houses in London, for my next novel BEWITCHED, which will come out next April and in which the hero lives in Albany together with his manservant Hobbes (as in Calvin and Hobbes) (only my hero's manservant is, of course, no stuffed tiger!). I researched the topic some more for a workshop I gave at the Beau Monde conference last Wednesday. So here it is: Albany in a nutshell.

Melbourne House
Built by Sir William Chambers in 1771-74 for the first Lord Melbourne: the new house was to reflect his new rank and act as setting for the entertainments hosted by his wife. Only the best decorators would do for the inside of the mansion: Cipriani painted the ceiling of the saloon; Rebecca did the trompe-l'œil decoration, and Wheatley decorated the walls with landscapes.

York House
In 1791, Lord and Lady Melbourne agreed to exchange houses with His Royal Highness Frederick Duke of York and Albany: they moved into his house in Whitehall, he and his new wife moved into the former Melbourne House. The exchange was supposedly put into motion as a result of a remark dropped by the duke during a visit to Melbourne House. Since both houses were heavily mortgaged, the transaction was a complicated business and not completed until November 1792. Shortly afterwards, the war with France broke out and the Duke left for the continent. In his absence, his wife retired to Oatlands Park in Surrey, where she assembled an enormous collection of pet dogs, parrots and monkeys.

Due to the Duke's extravagant life-style the mortgage on York House continued to grow in the following years. Ten years after he had bought the mansion, it was sold off again, most likely to repair some of his debts.

The Albany
In 1802 York House was bought by Alexander Copland, a young builder, who planned to remodel the house and to transform it into sets of freehold apartments. The original house (the Mansion) was kept, four shops were added to the existing forecourt buildings on the Piccadilly side, while on the site of the former garden two ranges of new buildings were erected. Between those houses, a roofed path, the Rope Walk, leads from the mansion to the north entrance in Viggo Street.

From among the first purchasers of rooms, seven trustees were elected and were charged with the regulation of the whole property. The first rule they laid down concerned the name of the new premises: henceforth it should be known as Albany. However, in the 19th century, it was common to use the article with the name, "the Albany", whereas in the early 20th century this was considered to sound too coarse and the article was dropped again.

The Albany soon became a fashionable residence for men of position and wealth; the first female residents didn't arrive until the 1880s. The selling and letting of rooms was overseen by the board of trustees in order to prevent any unworthy personages from moving in. It was further decreed that no trade or business should be conducted in the apartments without the trustees' consent. Exceptions were made for the rooms in the courtyard buildings: from 1804-09 Henry Angelo had his Fencing Academy there and probably shared his rooms with Gentleman Jackson in 1807. The set was eventually taken over by architects George and Lewis Wyatt. For a while Jane Austen's brother Henry also had his offices in the courtyard of Albany.

The sets of chambers in Albany were lettered and numbered: A1, A2, etc., the letters being written down on the doorways. The lease for apartments ranged from 30 to 40 GBP per annum. The early residents of Albany included: Lord Byron (whom Lady Melbourne's daughter-in-law, Caroline Lamb, chased so mercilessly), Matthew Gregory "Monk" Lewis, Lord Brougham (later Lord Chancellor, stout defender of Princess of Wales and designer of the brougham carriage), Henry Holland (the architect who had transformed York House into the Albany). Among the later residents were Gladstone (who eventually became Prime Minister), Edward Bulwer Lytton (the writer), and-–Georgette Heyer!

Good article with lovely pictures can be found on British History Online. (And for some strange reason Blogger seems to delight in messing up my formatting today. Grrr.)
Posted by Sandra Schwab at 11:08 AM