News and Media: Paper and the Printing Revolution

As a Silk Road enthusiast, it's intriguing to track the development of ideas from East to West. In grade school, we were often taught the history of inventions as if they were a single moment of However, the invention of paper and printing techniques is a wonderful opportunity to look at the development of mass media across cultures and periods rather than a single point in time.

The invention of modern papermaking is credited to the eunuch Cai Lun who reported his achievement during the Han Dynasty, circa 125 A.D. However, archaeological evidence has been found that shows paper was in use 200 years earlier in the western regions of China and the Greeks and Egyptian wrote on scrolls and codices made of papyrus as far back as 3000 B.C. 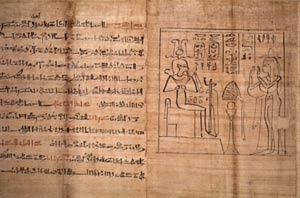 Example of Egyptian papyrus
The availability of a durable and cheap material such as paper or papyrus made it possible to communicate and transmit ideas over long distances as well as record information for future generations. But the act of writing by hand was slow and the knowledge was also limited to only the elite: religious clergy, nobility, and royalty. 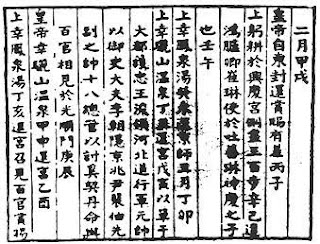 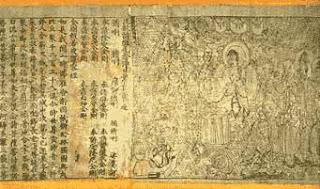 The first printed newspaper, Kaiyun, was started during the Tang Dynasty in 713. In 868, Wang Jie printed a copy of the Diamond Sutra, which is the oldest printed book in existence. By the 11th century, alchemist Bi Sheng, began working with movable type. Printed books replaced scrolls and there's evidence of color printing from China as early as the 14th century.

In the 15th century, Johannes Gutenberg's printing press brought about what is commonly lauded as a communications revolution. But what about the Chinese movable type press which had been invented four hundred years earlier? Some historians believe that inventions such as paper, the compass, and the printing press spread from east to west across the trade routes known as the Silk Road whereas other scholars argue that Gutenberg independently discovered movable type. 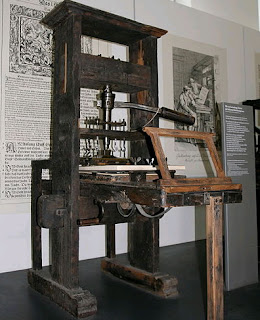 More interesting than the question of "who did what" is the examination of why the mass media boom happened in Western Europe during the Renaissance/Reformation period rather than Song Dynasty China in the 11th century, even though comparable technology was available.

Though the Chinese press was indeed a major advancement that allowed the empire to print money and distribute information, the language itself, with its thousands of unique characters, wasn't as suited to mass production. The complex characters couldn't be broken down in any systemic way so molding the characters was inefficient. 400 years later, Gutenberg's press was able to make use of the simpler and systematic Latin alphabet to usher in the communications revolution.
Posted by Jeannie Lin at 8:00 AM