Good Times: Drinking Games of the Past

"Drunkenness is nothing but voluntary madness." ~ Seneca, Roman philosopher and statesman (3 BC–65 AD)

What are good times without a small discussion of drinking and the games that people play while drinking? A brief survey of the drinking games of old reveals that alcohol and the revelry in its presence is a humble yet universal link across different times and cultures.

One of the earliest written records of a drinking game was in Plato's Symposium where a group of men attend a drinking party and deliver speeches about Eros, love. The game there was simple as drinking games tend to be: fill a bowl with wine, drain it, slap it down, pass it on.

The ancient Greeks also played a game called kottabos, which involved flinging dregs of wine from their bowls onto a target at the center of the room, with prizes or penalties designated for making or missing the mark. Then there was an even simpler drinking game--endurance drinking. The host would designate a number. Anyone who couldn't hang would be banned from future games. 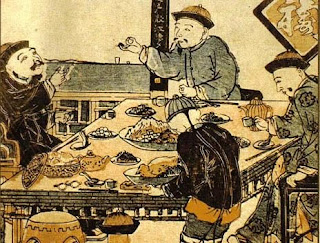 The ancient Chinese also had a host of drinking games to liven an evening. The basic game had an appropriately descriptive name, "Bottoms Up." The elite and educated would often play drinking games that involved spouting poetry or guessing riddles. Less literate games involved drinking based on the roll of a dice or drinking contests with referees and governors. One game involved setting up a series of puppets of dolls dressed as Westerners in the center of the room. When one fell over, whoever it pointed to had to drink.

A famous Chinese drinking game involves both coordination and rhythm. Tiger, Chicken, Worm, Board is believed to have been around since medieval times and is variant on Rock, Paper, Scissors:
It involves a chant, pounding out a rhythm on the table, and then shouting out of one of the items. Missing a beat or losing the battle results in a penalty drink.

A variant of the "Tiger, Chicken, etc" or "Rock, Paper, Scissors" drinking game became a popular staple of the geisha drinking culture, which flourished in 17th and 18th century Japan. Geisha were trained in the exquisite arts of dance, music, and conversation. They also had a range of parlor games and drinking contests in their arsenal to keep their guests entertained. 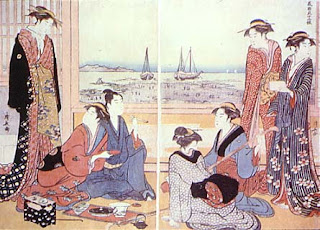 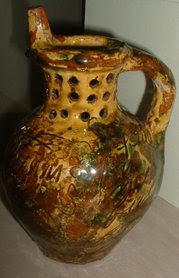 Sometimes simple is best. A drinking game that originated in 14th century France involved a special drinking vessel--the puzzle jug. The contestant was given a jug with holes built into the design. The goal was to tilt it just right to get to the alcohol. My guess is most of the players must have already been inebriated to start with as most of the drink inevitably poured out of the holes onto the victim to the enjoyment of all onlookers.

The pinnacle of special drinking vessels has to be the yard of ale, a one yard long glass that holds 3 pints. Most likely this practice originated in 17th century England. John Evelyn, a Fellow of the Royal Society, records the practice of toasting James II with a yard of ale in Kent in 1683. Drinking a yard of ale became a traditional pub game. As with all classical games, the rules were easy. Drink the entire yard without pausing. 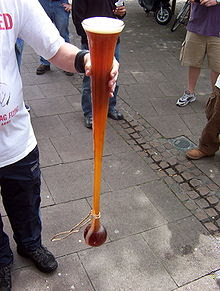 The still popular "yard of ale"
In more recent history, the popular game of "beer pong" is believed to have originated in the 1950s at Dartmouth College and morphed from the practice of playing ping pong and drinking beer at the same time. The origin of the popular game of "quarters" is unknown. It belongs to antiquity.

Good times to all and remember to drink responsibly!
Posted by Jeannie Lin at 7:00 AM