No, Bluto, not that kind of food fight. 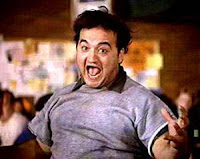 It seems that as long as there have been cultures blessed with a surplus of food, there have been food fights. Frenetic, messy, anarchic food fights. A collective release of aggression that also, mysteriously, builds community. One moment, you’re throwing tomatoes at your neighbor’s head, the next moment, you wrap them in a tomatoey, pulpy hug.

Our food fight tour begins first in Spain, where the famous Tomatina Food Fight is held in the village of Buñol, near Valencia. If you happen to be in Buñol on the fourth Wednesday of August, be sure to wear clothing you don’t mind getting stained. La Tomatina is a fairly recent event, its earliest origins dating to somewhere in the 1940s. Apparently, a civil disturbance in the town lead to a confrontation with local police, and this degenerated (or evolved) into a tomato fight. 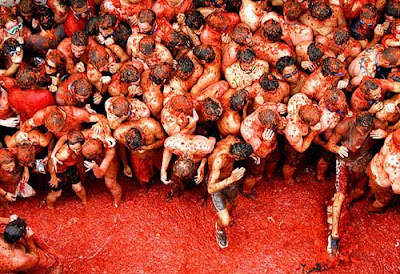 That food fight was so popular that it became an annual occurrence, and is now a huge tourist attraction, drawing more than 20,000 eager tomato-throwers from around the world. A week-long fiesta culminates in a climactic tomato battle. Trucks laden with 90,000 pounds of tomatoes rumble into town, and people on the backs of the trucks throw tomatoes into the crowd. The crowd retaliates, and soon a full-blown batalla takes place between anyone and everyone who happens to be in throwing distance. Within thirty minutes, the battle is over, and combatants/celebrants all head down to the river for a good wash.

For those of you who need more vitamin C, we head to the small Italian town of Ivrea, 40 miles north of Turin. Here, during Carnival, the local citizens commemorate an 1194 insurrection against a local despot with a Battle of the Oranges. Popular lore has it that the tyrant attempted to exercise his droit de seigneur with an unwilling maiden on the eve before her wedding. The maiden, Violetta, turned the tables on her would-be assailant and decapitated him, after which, the populace stormed and destroyed the castle.

The event and assertion of independence is celebrated by teams of Aranceri (orange handlers) on foot throwing oranges at Aranceri riding in carts. Originally, beans were thrown by the celebrants, but some time in the 19th century oranges became the projectiles of choice--which are considerably harder than beans, especially after a winter frost. No wonder many of the Aranceri wear helmets. 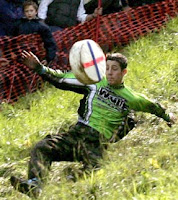 Stretching the definition of "food fight," we head north, to Cooper’s Hill, near Gloucester in England. During the Spring Bank Holiday, local citizens and tourists make a mad dash down a steep hill for a wheel of Double Gloucester cheese. It’s estimated that the event is over two hundred years old, though between 1941 and 1954, a wooden cheese took the place of the actual cheese due to rationing. During the event, a round of cheese is rolled down Cooper's Hill and, one second later, competitors race after the cheese. The hill is very steep, and not only does the cheese reach high velocity, so do the racers. Sprains and broken bones are not uncommon. Separate races are run for men, women and children, with the winners receiving small monetary compensation as well as a wheel of cheese--but everyone who tumbles down Cooper's Hill in pursuit of Double Gloucester is a winner. Surely Wallace would agree. 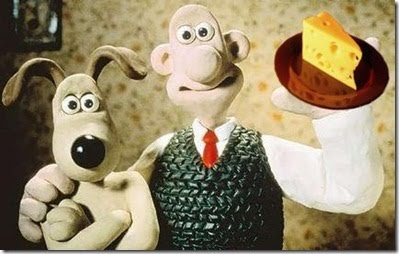