Herein lies a tale of the perils of being a WAG in Rome. 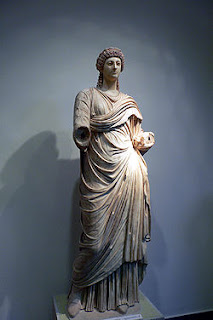 In the early days of the Roman Empire, in 30 AD, a young woman named Poppaea Sabina grew up around the Pompeii area. The exact location of her family house has been lost but it is supposed to be the House of Menander. Her family had wealth and she had extreme beauty with flame-coloured hair and a winning manner. She had also inherited her father's drive. Some commentators like Josephus describe her as a deeply religious woman, possibly with Jewish sympathies. But others such as Tacitus describe her as the ultimate schemer.

Her father was an ambitious man from a humble background. According to Tacitus, her mother was one of the most beautiful women of her generation. In 47 her mother committed suicide, the innocent victim of the intrigues of the Empress Valeria Messalina. Her mother had been accused of having an adulterous relationship. It is not known how this affected the 17-year-old Poppaea Sabina, as she had been married to Rufrius Crispinus when she was 14.

Rufrius was a much older man of humble origin, possibly Egyptian, who had risen to become head of the praetorian guard under Claudius and was a great friend of the Empress Messalina. Poppaea bore him a son before they divorced. The reasons for the divorce are not known but Poppea was determined to succeed. For her next marriage, she married Otho, the boyhood friend of Nero. Seven years younger than Poppaea, Nero in the early years of his reign was considered to be a good emperor and indeed the hope of a new dawning of Roman brilliance.

There is speculation that she married Otho so that she could become close to Nero, as she was a girl with an eye on the main prize. Otho was bandy-legged and had a horror of hair on his body, but he was a close friend of Nero's. Other accounts state that Otho brought her to Nero's notice when he boasted of his wife's beauty. It doesn't matter how the affair started but it did. And it was an all-consuming affair. In 58 Poppaea became Nero's acknowledged mistress. Otho was divorced and sent away to govern Luisitania. Poppaea now had the world at her feet, but the position of a mistress is precariously and Poppaea wanted more. She wanted her younger lover to prove his devotion to her rather than to his mother. She encouraged him to think for himself and to live like an Emperor should do.

Nero's chief claim to the Roman throne was through his then-wife, Octavia, the daughter of the late Emperor Claudius. In 59, due to Poppea's urging, Nero divorced Octavia and broke with his mother Aggrippina. Some historians claim that Poppaea organised the murder so she could marry Nero and consolidate her own power. Others state there were political motives and Poppaea was an easy target.

Nero and Poppaea married and she became empress. Nero gave her the title of Augusta after their daughter was born. Not bad for a girl from Pompeii who didn't have any connections. Having achieved her ambition, Poppea set about spending the entire Roman treasury. What is the point of being Empress unless you can flaunt it? However, this tale does not have a Happily Ever After.

Her triumph did not last as Nero began to spiral into madness. She began to worry about losing her looks and having another take her place. She and Nero fought bitterly over many things, including the time he spent at the races away from her. Things came to a head in 65, when heavily pregnant, Poppaea began to scream at Nero. A knock-down drag-out fight occurred. He apparently kicked her in the stomach. Although some accounts state he repeatedly jumped on her stomach until she was dead, modern historians think she might have had a late miscarriage. Shortly afterward Nero had her son by Rufrius put to death.

After Poppaea's death, Nero descended into complete madness, including dressing up a male slave as Poppaea and pretending that she remained alive. Monteverdi later made the tale into the tragic opera Poppaea which scandalised Venetian opera goers in the early 17th century.
The tale of Poppaea does go to show that the Romans really did know how to do scandal well.

Michelle Styles writes in the Roman, Viking, Regency, and early Victorian era for Harlequin Historical. Long-ago gossip is one of the bonuses of doing research. You can read more about her books on her website.
Posted by Michelle Styles at 7:00 AM