Tragic Tales: The Lost Children of Charles I

Born in 1635, Princess Elizabeth was called "Temperance" due to her kind nature. When she was seven, her father, Charles I marched into the House of Commons with troops to demand the arrest of five MPs. London was soon in open revolt and the royal family forced to flee for their safety. 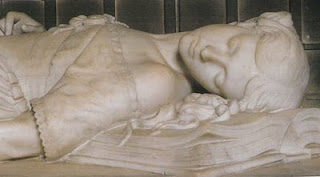 Princess Elizabeth's Tomb Sculpted by Carlo Marochetti
The King and two elder sons, Charles and James, established a new royalist government at Oxford, but the Commons refused permission for Elizabeth and two-year-old Henry, Duke of Gloucester to join their parents, keeping them virtual prisoners at St. James's Palace. Their mother and baby sister, Henriette Anne, born in 1644, eventually fled to the continent, but Elizabeth never saw her mother again.

A sickly child, Elizabeth broke her leg in 1643 and was moved to Chelsea with her brother and tutored by the female scholar, Bathsua Makin. At eight, she could read and write Hebrew, Greek, Latin, Italian and French and the scriptures in their original tongues.

When Elizabeth was ten, her hostess, the Countess of Dorset, died and she and Henry were placed in the care of the Duke of Newcastle in a house on the Thames. James, Duke of York, was allowed to visit, but Elizabeth was concerned about him being around the king's enemies for any length of time and provided the clothes and perhaps the plan for his escape to the continent.

In 1647 Elizabeth and Henry were living at the country home of the Countess of Leicester. The French ambassador described her as a "budding young beauty" characterised by grace, dignity, sensibility and intelligence. Unlike her father she could judge different characters and understand different points of view. But she was powerless, distraught and saddened as the tragedy of the English revolution unfolded. As parliamentary prejudice hardened the Countess of Leicester was ordered to treat her royal charges without special privileges.

In January 1649, when Charles was tried, found guilty of treason and condemned to death, Elizabeth wrote a long letter to parliament requesting permission to join her sister, Princess Mary in Holland. This request was refused until after the execution had taken place.

On the day after Elizabeth's 13th birthday, King Charles was allowed one last meeting with Elizabeth and Henry. The prematurely aged king told her not to grieve as he would die a martyr and he gave her a Bible, which she kept close at hand for the rest of her short life.

The royal children were stripped of their titles and no one was allowed to kiss their hands or treat them as royal. Prince Henry, Duke of Gloucester, was now merely "Mr. Harry". Parliament continued to treat then with consideration, but the myth that they planned to marry Elizabeth to a commoner and apprentice Henry to a trade was royalist propaganda.

In July 1650, the ruling Council of State decided to move Elizabeth and Henry to their father's former prison, Carisbrooke Castle. Elizabeth complained that her health was not equal to moving, but it went ahead anyway. They were taken there by the king's former servant Anthony Mildmay, described as, "at heart a knave".

Elizabeth had always suffered ill health, possibly including rickets. On the Monday after her arrival she caught a chill, that developed into a fever which turned into headaches and fitting. On the morning of Sunday the 11th September 1650, Elizabeth was found dead, her head resting on the open Bible that had been her father's parting gift. Ironically three days later, unaware of the tragedy, the Council of State decided on her release so that she could join her elder sister Mary in the Netherlands. (Henry was released to Mary in early 1653.)

Elizabeth's coffin was laid in a vault under the floor of St Thomas Church in Newport, Isle of Wight, with a stone marked "E.S." for Elizabeth Stuart as her only memorial. She was fourteen years old.

In the 1850s Victoria and Albert, whose holiday home, Osborne House, is on the Isle of Wight, hired Carlo Marochetti, an Italian sculptor to complete a new tomb for Elizabeth in Carrara marble. Completed in 1856, Queen Victoria was so impressed with the result, she hired the same sculptor to carve the mausoleum statue for herself and Albert.

Henry, Duke of Gloucester joined his two brothers in exile and in May 1660 returned to England with the new King Charles II. In September, he died of smallpox at age 20. 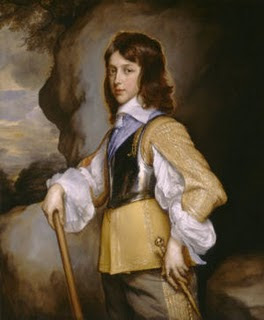