This week on Unusual Historicals we're welcoming contributor Jeannie Lin as she celebrates the release of "THE TAMING OF MEI LIN," a Harlequin Historicals Undone set in Tang Dynasty China!

When a corrupt local official wants to take Mei Lin as, not second, but third wife, she rebels and makes an outrageous declaration--she'll only marry a man if he can defeat her in a sword fight. She has managed to fend off the local thugs and village hopefuls, but then a tall, mysterious stranger comes into town...

What made you decide on the Tang Dynasty as a setting for "THE TAMING OF MEI LIN"?

I explained to someone recently how the Tang Dynasty to Asians is how many people think of the Regency period in England. The Tang Dynasty was a golden era of high culture. It was a time of beautiful art and music, literacy, and diplomacy. The clothes and fashions were lavish as a reflection of the wealth and ministers and courtesans alike were expected to be witty, intelligent, and charming. Most importantly, women enjoyed more independence during this time with several noteworthy women rising to the highest positions in the empire. This was a time ripe for strong, larger than life heroines.

What really attracted me to the Tang Dynasty was the fall of the empire, which actually happened over a period of two hundred years. This was a more tumultuous time when I envisioned the empire still enjoying the wealth of its height, while political skirmishes and the rise of powerful warlords chipped away at its foundation. The inherent conflict there was too rich to ignore. 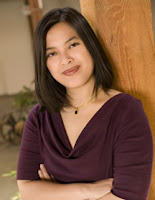 What were some of the challenges of making such an unusual time period accessible to readers?

I knew that the language and specifically the names could be a barrier. I went back and forth a lot with how much Chinese to insert and also took care to use names that were easy on the ear and the eye. I also knew readers had expectations about China. I received a lot of comments about foot binding and how my heroines could behave so independently in a culture when women were subjugated.

I tried to focus building a vivid and authentic world and hoped that the more readers became engaged in the story and the characters, the less they would doubt the historical details.

Your Harlequin Undone, "THE TAMING OF MEI LIN," features several fight scenes. What sort of research went into that?

I love sword fights! I've always loved watching a hero and heroine duke it out with swords. The duel in Red Sonja between Arnold and Brigitte Nielson is one of my favorites. It just doesn't happen enough.

As to research, I trained for two years a long, long time ago in Wing Chun Kung Fu. During that time, I took several seminars on the butterfly sword form. In that style, the double short swords are an extension of your arms. The sword techniques are extensions of the hand to hand techniques. I thought that style was perfect for my heroine and I understood the principles of the system enough that I felt I could make it authentic.

"THE TAMING OF MEI LIN" is described as a linked short story to your October debut, BUTTERFLY SWORDS. Can you explain the link between them?

Ai Li is the heroine of BUTTERFLY SWORDS. "THE TAMING OF MEI LIN" is the story of her grandmother and grandfather, who I envisioned as having many heroic tales of their own in the past. So the short story is a prequel to BUTTERFLY SWORDS. In it, I got to explore what events contributed to Ai Li's feisty, yet honorable nature and what gave her the strength find love on her own terms. 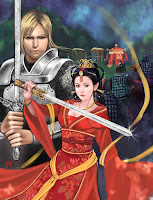 Be Sure to join the Sept.-Oct. launch celebration for "THE TAMING OF MEI LIN" and Jeannie's October debut, BUTTERFLY SWORDS, at this special website. Jeannie will be giving away actual butterfly swords, great books, and this original artwork as part of the festivities!

Thanks for stopping by, Jeannie! The buzz is already huge for BUTTERFLY SWORDS. Jeannie is giving Unusual Historicals readers a little taste of this excitement before her October debut. Leave a comment of question for Jeannie for your chance to win a copy of "THE TAMING OF MEI LIN," a short story from Harlequin Historicals Undone. The story is available in Adobe PDF, Adobe EPUB, Microsoft eBook, or Microsoft MOBI formats. I'll draw a winner at random next Sunday. Void where prohibited. Best of luck!
Posted by Carrie Lofty at 1:00 PM