Throughout the centuries people have paid their debts and bought and sold goods using forms of exchange ranging from feathers to salt to pigs and including almost everything in between. The American Indians using Wampum and the denizens of Fiji using whales' teeth as currency would both probably agree upon one thing: it's important to have a medium of exchange when you need what someone is selling but the seller doesn't have any need for what you have to offer in trade. Anything can be perceived to be money if people agree it has value. 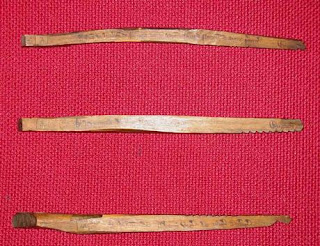 It is generally believed that the tally record originated as a recording or counting device for tasks such as tracking menstrual cycles via a lunar phase calendar. One of the oldest examples of a tally record dating back to 30,000 BC was found in a cave in the Lebombo mountains of South Africa. The artifact consists of 29 distinct notches on the leg bone of a baboon.

As commerce developed through medieval Europe, another use for the tally record was found. With coins in short supply and the population largely illiterate, a bookkeeping method was needed to record mutual exchanges and outstanding debt. King Henry the First, son of William the Conqueror, is credited with inventing the tally stick system when he ascended the throne of England in 1100 AD. 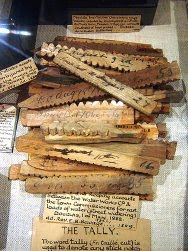 In England, tallies took on the characteristics of today's credit card system as lenders carved out the details of the loan using a system of notches to signify denominations on the surface of a small squared willow, pine, r hazel-wood stick. At the top of the tally, a cut the thickness of the palm of a man's hand was made, representing one thousand pounds, then subsequent cuts were made to designate other values. The breadth of a thumb meant one hundred pounds, the width of a little finger represented twenty pounds, the width of a barleycorn translated to one pound, and so on. The stick was then split in half lengthwise through the center of the carving, creating a "split tally," which prevented either user from adding notches to his half of the tally stick.

Each party to the transaction was given one half of the marked tally as proof. Because the type of wood used to create the tally was selected for its clear grain, the grain of the wood was similar to the watermark on today's paper money. The two halves would be perfectly matched, fraud was difficult to perpetrate, and refinements were added over time to make the documentation of the transaction virtually tamper-proof. The two halves of the stick were made different lengths, with the lender given the longer part of the stick, referred to as the stock, which formed the basis for the modern term "stockholder" while the shorter portion, called the foil, was given to the party who had received the goods or funds. Literally, the debtor received "the short end of the stick."

King Henry expanded the use of tally sticks to include the collection of taxes by local sheriffs, creating a demand for them, and the sticks began to circulate as a form of money as a result. Revenues owed to the Crown were collected in this manner, and the tally stick system formed the basis of the British Empire until the formation of the Bank of England at the end of the 17th century. Tally sticks found their way into medieval courts as evidence, and into the works of William Shakespeare, who referred to them in Sonnet 122.2 from Henry VI: "nor need I tallies thy dear love to score."

When King Charles II adopted the idea of selling royal debt at a discount, he nearly plunged the country into bankruptcy by selling tallies at a discount for the purpose of financing war. 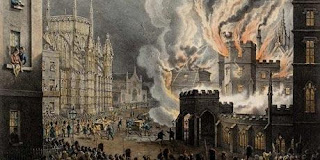 A century later, the sticks were still in use, but the tally stick system was eventually abolished in 1826, when the sticks were removed from circulation and stored in the Houses of Parliament. In 1834, Parliament ordered all sticks destroyed, and two cartloads of the tallies were scheduled to be burned. Rather than give the sticks away to be used as firewood, or burning them in an outdoor fire, a decision was made to burn them in two furnaces in the House of Lords. The resulting conflagration set fire to the wood paneling and both Houses of Parliament were destroyed.