To be honest, the idea for this post came from a Twitter feed. Every morning the Dalai Lama sends out a message to the world. One such message: "Anger may bring extra energy, but it eclipses the best part of our brain: its rationality. The energy of anger is almost always unreliable."

Though I doubt His Holiness is personally typing his tweets every day, the fact that the Dalai Lama is on the interwebs made me wonder about the complexities of being a political and spiritual leader in modern times.

According to author Thubten Samphel-Tendar in the The Dalai Lamas of Tibet, the leaders Tibet sent a delegation to meet with Genghis Khan in 1207. As a result, the Mongol ruler spared Tibet from his conquest of most of Asia. Subsequently, a symbiotic relationship formed between the Mongols and Tibet where the Tibetans served as spiritual advisers while the Mongols provided protection.

In accordance with such a relationship, the title of "Dalai Lama" was first bestowed in 1578 by the Mongol ruler, Altan Khan, to Sonam Gyatso, who is actually known as the Third Dalai Lama. The title was posthumously applied to Sonam Gyatso's two previous incarnations.

1st Dalai Lama
The Dalai Lama is traditionally believed to be the reincarnation of the Bodhisattva Guan Yin. A "bodhisattva" is a person who has achieved enlightenment, but has chosen to stay on this earth to guide others. There have been 14 recognized incarnations of the Dalai Lama.

The Dalai Lama is the leader of the Guleg or Yellow Hat sect of Buddhism and has traditionally served as the head of the Tibetan government. For this reason, the position is both a spiritual and a political one. Since the position's inception, there have been rival and puppet Lamas propped up in power struggles to control Tibet. Many were suspected of being poisoned or assassinated. 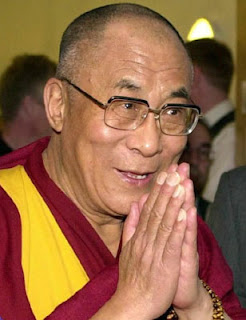 The 13th Dalai Lama took more active part in government and issued a formal Declaration of Independence for Tibet from China. He attempted to establish an autonomous government and modernize Tibet. The 14th and current Dalai Lama, Tenzin Gyatso, was not crowned until 1950; 17 years after the previous Dalai Lama's death. His Holiness Tenzin Gyatso took the position in a time of turmoil. China invaded Tibet in 1950 and nine years later, the Dalai Lama fled the country to establish a "government in exile" in India.

Despite coming from a pacifist religion and a monastic culture that was traditionally isolated and hidden from the public, the current Dalai Lama has taken an active role in the world stage, drawing awareness to the plight of Tibet and proposing plans before the UN, the U.S. Congress and the European Parliament to negotiate peace between China and Tibet and convert Tibet into a zone of peace within Asia.

As a leader of the Tibetan government in exile, he's worked to develop a plan for a democratic Tibet and has instituted an election to democratically select the leaders of Tibet. The Dalai Lama has declared that once Tibet is free, he will step down as its leader and relinquish that position to a democratically elected president.

In 1989, His Holiness Tenzin Gyatso received the Nobel Peace Prize. In his acceptance speech, he stated: "Although I have found my own Buddhist religion helpful in generating love and com passion, even for those we consider our enemies, I am convinced that everyone can develop a good heart and a sense of universal responsibility with or without religion."

This all-encompassing message of openness and peace is why the Dalai Lama is recognized as an influential leader, thinker, and advocate with a message that resonates with millions of people all over the globe.
Posted by Jeannie Lin at 7:00 AM