An Ordinary Day In: The Life of A Chuck Wagon Cook

The first rays of dawn are peeking over the horizon, and a few moos from the waking cattle herd tell the cowboys it’s time to mount up and tend to business. Life for both man and beast is hard on a cattle drive.

But one man had been hard at work long before the cowhands awoke--the cook, or Cookie, has he was often called (or cousie, by those who spoke Spanish).

Before we get into Cookie's day, let's take a look at who he was. Most chuck wagon cooks were ex-cowboys who were either too old (meaning in their 30s and sometimes 40s) for cowpunching or were injured. Either way, he was experienced in all aspects of the cattle drive and no one, not even the trail boss, questioned his authority around the campfire if they knew what was good for them.

Most cooks were considered surly old coots. Of course, with the terrible working conditions, the injuries, the heavy lifting, the rigid schedule of long working hours and short nights, it would be hard for nearly anyone to maintain a sunny disposition. In return for their efforts, cooks made nearly as much money as the trail boss and double that of the average cowhand--but they earned every penny of it.

Food was (and always will be) important to young men, and most cowboys were 14 to 25 years old, so hiring the best cook helped the trail boss recruit the most accomplished cowboys. That's another reason why trail bosses didn't give a good cook any guff, or let the cowhands get out of line. Once he lured a good cook onto his crew, he did his best to keep him. 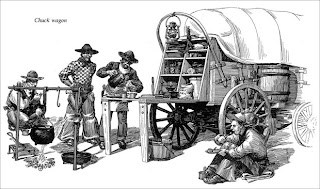 Chuck is defined by Etymology Online as a "piece of wood or meat," 1670s, probably a variant of chock "block." The "meat" sense is the source of American English chuck wagon, from approximately 1880. The date is, of course, wrong, since Charles Goodnight is credited for inventing the chuck wagon in 1866, and it was called a chuck wagon, so the correct date should be 1866.

While companies did make chuck wagons (Studebaker, for one), most were converted farm wagons with a chuck box on the back. A hinged lid with folding legs on the chuck box served as a fold-out work bench, and there was generally hooks for a canvas at the top of the wagon to use as a sun shade. Underneath the chuck box was the boot, where they carried the Dutch ovens, tin plates, forks, knives, spoons, and cups, and whatever else they could get in there. Various hooks and fasteners on the sides of the wagon held the water barrel, large pots and tubs, axes, the coffee pot, and the like.

Underneath the wagon was another canvas or cowhide called the possum belly. Sometimes two or three. This is where they kept the firewood (or buffalo or cow chips) collected along the way for the evening fire. They also kept the kerosene for the lanterns here, usually in a separate boot. Inside the wagon, they hauled the flour, beans, coffee, dried fruit, canned goods, and other foodstuffs to last 30 days, as well as cowhands' bedrolls and personal effects, and whatever else was needed on the trail drive.

A Day in the Life of a Chuck Wagon Cook

Three in the morning comes pretty early when you put in an eighteen-hour day before, and before that, and before that... But while the cook got away with a considerable amount of crankiness and general orneriness, one thing that the cowhands wouldn't put up with was late meals. First order of the day is to build the fire and put on the coffee. Then he'd "build the biscuits," meaning he'd mix up the biscuit dough and set it to rise. Those two things were the mainstays no matter whether he was cooking for a cattle drive or a roundup. After that, he'd fry some sowbelly (bacon) and maybe a few potatoes if he had them, or maybe sourdough flapjacks. It took a good two hours to get breakfast ready.

Once the cowboys ate, they tossed their dishes in the wreck pan and off they went to the herd. But the cook's job has just begun, and he didn't get to sit down all day to do it, either. He had to clean up the dishes and pots, pack everything away, hitch up the team (usually four mules), and head to the noon destination at a pretty good clip, because he had to have dinner (served midday) ready before the herd got there. The business of the chuck wagon moseying along with the herd just wasn't true. In reality, he started an hour later, but had to be there two hours earlier than the herd, so it was sometimes a wild ride with a lot of cussing and hollering.

Once at the destination, he unpacked everything, started the fire and put on the coffee. He made coffee by boiling the water and then tossed a couple handfuls of ground coffee in and let it simmer. It's said that if you dropped a horseshoe in the pot and it sank, the coffee hadn't boiled enough yet. This meal usually consisted of warming up whatever was left over--just enough food to keep the hunger at bay. Maybe some son-of-a-bitch stew or the some other kettle food.

After he did the dishes and disposed of the food scraps, he packed everything up again and drove hell-bent-for-election to the evening camp, collecting firewood and other materials to use for camp fire fuel along the way.

Once he got there, you guessed it, he unhitched the team, unpacked everything all over again, started the campfire, put on the coffee, built the biscuits, slapped some steaks on the grill (for roundup, usually didn't have steak on a cattle drive), and, if the cowhands were lucky, maybe he'd make a vinegar pie or a tasty dessert out of dried fruit.

While the cowhands were sitting around the campfire drinking coffee and shooting the breeze, the cook was cleaning up, feeding his sourdough starter, and getting ready for the next day--more of the same.

But the cook didn't just cook. He was also the doctor, banker, referee, often the letter writer, and father figure.

Once the fire was out, the cowhands were bedded down, the cook could go to bed, too. He got the prime sleeping spot--under the chuck wagon, but in just a few hours, another grueling day would begin.

Cowboy etiquette, known by all except the greenest of green horns, dictated that:

-- Riders always stayed downwind of the chuck wagon so as not to get dirt in the food.

-- Horses were not to be tied to the chuck wagon.

-- There was no using the worktable as the dining table.

-- Cowboys were very careful not to let the lid touch the dirt while serving themselves from the pot.

-- Never take the last of anything unless everyone had been served.

-- Always scrape your plate clean and stack it in the wreck pan to be cleaned (when water was scarce, they were cleaned with sand.)