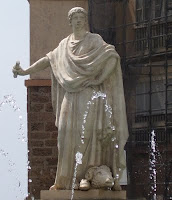 With the wicked Egyptian seductress dead, the Romans had every reason to believe the Republic would return to normal. Oh, some might argue that Cleopatra’s conqueror now meant to destroy the Republic and rule as king. He had, after all, begun to call himself Augustus (the illustrious one). But now that the civil wars were over, up-and-coming politicians like Lucius Cornelius Balbus bet that everything was going to return to normal.

Though Balbus was born in Spain, he’d been granted Roman citizenship, and had every reason to believe that he had a great future as a leader. He wasn’t a nobody after all. He was from the plebian side of gens Cornelia. Which is to say, he was related, in the complicated way of the Romans, to the Cornelii, a family who had, thus far, produced more Roman leaders than any other.

For nearly five-hundred years Rome had been ruled by her citizenry through elected bodies, governed by a carefully constructed constitution of checks and balances. Unlike our own Constitution, it didn’t guarantee equal opportunity for all--but Balbus believed it gave him a decent chance! Since Rome had done away with kings long ago, an ambitious young man could reach the pinnacle of power by working hard for the public. Young Romans started upon what was known as the cursus honorum (a course of offices) starting with military service and lowly magistracies and stretching all the way to the lofty heights of the consulship of Rome. If a young man had a taste for military life, he might become a pro-consul or governor of a province, and if he won a successful war, he would even be granted a giant military parade known as a triumph

This military parade was one of Rome’s highest honors and a man who was granted one of these would be known as a triumphator for the rest of his life! The Senate had never allowed anyone to celebrate a triumph who hadn’t been born a Roman citizen, but Balbus thought he might have a shot, if only there were a foreign war to be found.

He’d started his military career serving under Julius Caesar. When the dictator was assassinated, Balbus appears to have gone off to find his fortune in Mauretania at the side of King Bogud. Mauretania was just across the straight from Balbus’ home town of Gades and it was a land of plenty. Good fishing, lots of natural resources, and big plantations on which Balbus could grow wheat. Not a bad place to settle down--if Balbus had been the settling kind.

Before long, Mark Antony fell in love with Cleopatra and both of them went to war with Rome. So when King Bogud sided with Mark Antony and Balbus may have been with them both at Actium. Whatever the truth of the matter, when the war was over, instead of returning to Spain, Balbus decided to make a name for himself in Africa.

Africa was, after all, Rome’s latest obsession. Once Augustus chose to marry Cleopatra’s daughter to King Juba II and make them both the rulers of Mauretania, it became clear that Africa was the hip and happening place to be. Balbus may have travelled with the court of Juba II & Cleopatra Selene. As an able soldier and veteran of the wars, he’d have been the natural choice for a Roman advisor to the new monarchs. He almost assuredly had land there and would have wanted to be on good terms with the new folks in charge. Especially since Juba and Selene were nominal members of Augustus’ extended family

Juba and Selene were indebted to Augustus and sought to honor him at every turn. They had realized what Balbus had not; the Republic was on its way out. Augustus was about to form a monarchy in fact if not name, and “the new Caesar” didn’t look kindly upon rivals. Augustus had no intention of ever allowing another Roman--especially not one born in Spain like Balbus--to have any true independent power.

But Balbus still had big plans. He accepted a post as the Pro-Consul of Africa Nova--a province just to the east of Mauretania. There he waged an aggressive war against the Garamantes, a Berber tribal people of ferocious spirit. And when he captured their settlements, collected their loot, and dealt them a decisive defeat, he appealed to the Roman Senate to grant him a triumph.
Now, as mentioned before, Augustus didn’t like rivals. The so-called First Citizen appears to have decided that he should be the only man allowed to celebrate triumphs anymore. Consequently, when Marcus Licinius Crassus (grandson of the more famous triumvir) returned from a very successful campaign in the Balkans, Augustus tried to block him from celebrating a triumph. Crassus also disappears from the historical record shortly thereafter. This is unlikely to be an accident, considering the fate that befell others outside of the Julio-Claudian family who sought military honor. (Another example is the Praefect of Egypt, Cornelius Gallus, who was forced to commit suicide for boasting of his military achievements.)

Fortunately for Balbus, when he made his request for a triumph, Augustus happened to be out of town. (The would-be-emperor was off in the East poised for war with the Parthians and perhaps a little bit out of the loop.) In what would be one of their last independent acts, the Senate granted Balbus his heart’s desire. With high hopes and ambitions, Balbus apparently went to Rome with his soldiers, rode through the streets in a chariot, his face painted crimson, a slave whispering behind him a reminder that he was still a mortal. Balbus was the first non-Roman-born general to celebrate such an honor.
He was also the last.
He showed off his prisoners and loot, was hailed as an imperator, and saw the pinnacle of his career. He was treated like a king for a day. And then he was more or less never heard from again.

As far as Augustus was concerned, the legions all belonged to him now. Roman generals were only borrowing the army from him--not from the state--and therefore, every victory was actually his victory. Henceforth, only smaller celebrations and honors and ovations were allowed to those outside the imperial family. Returning from the East with the battle-standards that had been captured by Parthia in previous wars, Augustus snuffed out the Republic’s last breath and became the first emperor of Rome.

Stephanie Dray's debut historical fiction novel, LILY OF THE NILE , was just release by Berkley Books. The sequel is expected to release at the end of 2011. Both novels are set in the Augustan Age and feature Cleopatra's daughter.
Posted by Unknown at 1:00 PM