This week, we're welcoming Sheila Lamb, who is celebrating the release of her debut historical title, Once a Goddess, set in ancient Ireland. Sheila is here to talk about the novel, answer questions and give away a copy. 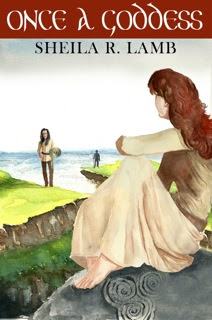 Two tribes battle for control of ancient Ireland, and Brigid must find her place among them, trapped between the will of her people and the desires of her heart.

For the sake of peace, Brigid of the supernatural Túatha dé Danann enters into an arranged marriage with Bres, the next chieftain of the enemy Fomorian tribe, whose iron weapons and brute strength challenge the Danann magic. The Danann instruct Brigid to spy for them, and to keep the source of their powers secret, dangerous tasks that complicate her goal of making the best of her forced union.

Sacrificing her own hope for love, Brigid faces the Fomorians alone. She must confront her rival, Morrigan, who competes for Bres's affections, as she begins to suspect that he is breaking the truce through lies and political manipulation. When his tyranny threatens the very existence of the Danann, Brigid must risk her life to unseat Bres from power.

Set in a time when myths were reality, Once A Goddess brings the legend of Ireland's magical Túatha dé Danann to life.


Tell us about Brigid of Ireland and how did she became the heroine for your book?


Brigid is a woman who appears throughout Irish history and mythology. She's seen as a pre-Christian goddess and one of the Túatha de Danann, a mythical tribe of early Irish settlement. She later appears as a druid who converts to Christianity and becomes the Abbess of Kildare.


I became fascinated by her various incarnations in myth and legend, and decided to write a trilogy based on each facet of her story. In the goddess cycle, she is known as  a goddess of poetry, of lament, and of fire and is sometimes portrayed as a blacksmith. She is also known as fertility goddess and is worshipped by the pagans and druids on Imbolc. Imbolc also falls on St. Brigid's Day.


Who were the Túatha de Danann?

The Túatha de Danann (pronounced too-ah) are part of early Irish mythology. In the legends, they are one of the first tribes in Ireland. They possess supernatural powers which they use to fight off subsequent invaders such as the Fir Bolg and the Fomorian.  Stories describe them arriving in Ireland on a cloud of mist. Celtic invaders, the Milesians, defeated them and legend has it that the Danann turned invisible and live underground. Any references to sidhe or fairies refer to the lost Danann.

These supernatural powers bring out the paranormal element in Once A Goddess. The Danann connect with a particular element of nature and can blend in with that element. Brigid, for example, can become one with stone.

Bres walks the line between villain and hero for much of the book. What motivates him?

Bres is a complicated character. He wants what he cannot have. He wants his father's acceptance yet knows there is something different about him that holds back Elatha's total trust. He wants to be a Fomorian warrior but he is also drawn to the Danann magic. Likewise, he is torn between his fanciful love for Brigid and to the Fomorian women of his past. This makes him sometimes irrational, vulnerable; until he finally decides which path he will follow.

What kind of research did you conduct for Once A Goddess?

I spent a lot of time in libraries, searching for Irish myths and legends. Two of my favorite books are Irish Myths and Legends by Lady Gregory and Celtic Myths and Legends by Charles Squire. There are many online sites about the Túatha de Danann as well, and Timelessmyths.com was a valuable resource.

I read various versions of the myths and different takes on characters to write a story that shows what life might have been like in the ancient world.  I really searched for the role Brigid played in these stories. Sometimes she is written as Dagda's wife, instead of his daughter, for example. In the stories where she is married to Bres, they are said to have three sons, but one of them is Ruadan, and Ruadan's story is one that is consistent.

What's next for Brigid?

Next, is the second part of Brigid's incarnation in the sequel, Fiery Arrow, which I'm editing now. Brigid is a talented druid in 5th century Ireland, where she must come face-to-face with Patrick, as he works to Christianize the pagan land. There are many connections to Once A Goddess and both Brigid and Patrick must come to terms with their opposing missions and their tangled pasts.


Thank you, Sheila, and best of luck with Once a Goddess! Leave your comment for Sheila - you might win a free copy.

Once A Goddess for Kindle

Smashwords
Posted by Lisa J Yarde at 10:26 AM