This week, we're welcoming historical fiction author Julie K. Rose, whose sophomore novel, OLEANNA, is set in Norway and America during the early 20th century.  Julie is here to talk about the book and give away a copy. Here's the blurb: 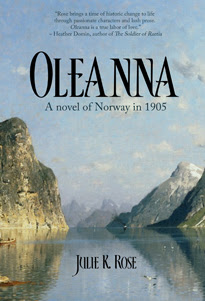 Set during the separation of Norway from Sweden in 1905, this richly detailed novel of love and loss was inspired by the life of the author's great-great-aunts.


Oleanna and her sister Elisabeth are the last of their family working their farm deep in the western fjordland. A new century has begun, and the world outside is changing, but in the Sunnfjord their world is as small and secluded as the verdant banks of a high mountain lake. With their parents dead and their brothers all gone to America, the sisters have resigned themselves to a simple life tied to the land and to the ghosts of those who have departed.

The arrival of Anders, a cotter living just across the farm's border, unsettles Oleanna's peaceful but isolated existence. Sharing a common bond of loneliness and grief, Anders stirs within her the wildness and wanderlust she has worked so hard to tame. When she is confronted with another crippling loss, Oleanna must decide once and for all how to face her past, claim her future, and find her place in a wide new world.

Oleanna was short-listed in the 2011 Faulkner-Wisdom novel competition, and will be available from Amazon, Barnes & Noble, IndieBound, and other online retailers in late January.

Why did you choose Norway as a setting for your book?
Norway has always been a subject of fascination to me. It is a place of incredible natural beauty: it is both wild and serene, majestic and bucolic. It has a (popular) history of wildness and adventure, and a present of social justice and peace.

As far back as I can remember, my mother instilled in me a great pride in our Norwegian heritage. Three of my four grandparents were Norwegian, two of them first-generation Americans. I was raised with syttende mai and Norwegian flags on the Christmas tree, stories of my mom's visit to Norway in the 1960s, Viking ships on the mantelpiece, plates decorated with rosemaling, Elisabeth and Oleanna's weavings on my dresser, and  my great-grandmother's bunad in my closet.

In 2004, I was lucky enough to visit Norway. The place, the people, and the history were incredibly inspiring, and in 2006 I began writing Oleanna, not only as a love letter to the country, but to fill a gap. Beyond Sigrid Undset*, there haven't been very many historical authors who have tackled Norway, which is a crying shame. It's an incredible country with a rich history.

*If you love historical fiction, get your hands on the Kristin Lavransdatter trilogy right away. Set in 13th century Norway, Undset received the Nobel Prize in Literature for the books in 1928.

What was the significance of this timeframe?
It was an interesting time for Norway.  The glory days of Harald Fairhair and St. Olaf had been buried (but not forgotten) while they spent 500 years under the thumb of first Denmark, and then Sweden (to whom the country had been given as a spoil of war in 1814). While the country enjoyed some freedoms, by 1905 the Norwegian parliament (the Storthing) and the people decided they wanted full freedom. In a complicated series of laws and proclamations, Norway declared itself independent on June 7, which was confirmed by a popular referendum in August, in which 99.95% of voters agreed to become fully independent once again.

You mention that the story was inspired by your great-great-aunts. Was there a specific event that inspired the book?
I'd always wondered what precipitated my great-grandfather's emigration to America, and what happened to the sisters he left behind.

Elisabeth and Oleanna were my great-great-aunts who lived at Myklebost on the banks of lake Jølster. They were both weavers of some acclaim and significant skill, and the family story is that a number of their weavings are on display in the Folk Museum in Oslo. As far as I have been able to tell, neither one married, or if they did, those tales were lost by the time my mother visited them in the early 1960s.

I've always wondered about these women, who carried on living on the farm after everyone had died or left for America. What were their stories? What were their lives like? Who did they love? The genealogical record does not indicate much, but not everything is revealed by a countrywide census or a parish's records. I tried to imagine what life would have been like in an isolated place like western Norway, when everyone they loved had left, and the world outside was changing. What kinds of choices would they have made?

Elisabeth and Oleanna's brother John is based on my great-grandfather, Johann Tollefson Myklebust, who emigrated to the United States in 1902 and was one of the first homesteaders of Ramsay County, North Dakota. He married Ingeborg Briesnes of Aurland (Sogn, Norway) and lived in Starkweather, ND until his death at the age of 97 in 1978.

This book seems to be a departure from your previous novel, The Pilgrim Glass.
Yes, in a sense. The Pilgrim Glass was a contemporary novel which included large doses  of 12th century French history. Oleanna is an historical novel focusing on early 20th century Norway. There are a lot of similarities, however. Both books explore the role of place in shaping history, and in shaping culture, and consider location an integral character in the story.

Where can I learn more about Norway and this historical period?
Some of my favorite resources focus on the every day life of Norwegians, including
Norwegian Folk Art: The Migration of a Tradition, Abbeville Press (1995); The Woven Coverlets of Norway, by Katherine Larson (U of Washington Press) (2001); and Remedies and Rituals: Folk Medicine in Norway and the New Land, by Kathleen Stokker, Minnesota Historical Society Press, 2007.

Thank you, Julie, and best of luck with Oleanna.Visitors, please leave your comment for a chance to win a copy of this novel.
Posted by Lisa J Yarde at 11:09 AM