This week, we're welcoming author Sue McGhee, whose novel When the Eagle flies with the Condor begins during the turbulent 1960's, where the impact social change and warfare alter the characters' lives. Sue is here to talk about the book and give away a copy. Leave a comment for a chance to win. Here's the blurb: 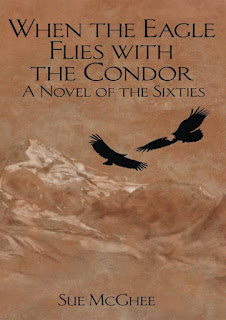 
How did you become involved with the indigenous peoples of Bolivia?
As a child, I spent years in Latin America and learned to love these people. The natives live a hard life especially in the Altiplano and have been oppressed for centuries. I was friends with Olympia, Francisca and Simon or their proto-types, and the story of Olympia’s practice as a medicine woman and mid-wife was real as well as my involvement in it.

Are you currently involved in supporting them?
No. Unless you consider this book a means of support. But I think their story is important. The current president of Bolivia, Evo Morales, is a native “cocalero” and he should appreciate what I’ve written about the coca leaf. I did sign a petition in January (2011) directed to the Secretary of State (Hillary Clinton) to remove the UN ruling of 1961 banning the natives from chewing or brewing the coca leaf in their own country because I felt it was an arrogant and embarrassing interference in the rights of the native peoples.

The novel is about the sixties and not exclusively Bolivia. How were you able to write from the perspective of a soldier serving in Vietnam?
Well, I have a lot of audacity and as a result may get some flak from veterans though I haven’t yet. The philosophy of the warrior is innate within me. That may sound contradictory, since the theme of the book is really anti-war. But in presenting Nick’s side of the Vietnam era, I found I was more of a “Cincinnatus” (as he saw himself), than a “Rambo;” that is to say, if you have to fight to protect your family, your country and save your metaphorical farm from marauders, then take up arms and go fight. But don’t invade countries you have no business being in and becoming, as in the case of Rome and Great Britain, imperialists.

How did you learn about shamanistic rituals?
From my childhood living with Olympia and also, when I visited Bolivia and Peru in 2007. I needed to confirm my early impressions, which turned out to be amazingly accurate after all, the intervening years. We stayed with a family who lived high in the Andes with no indoor plumbing, no electricity and no phones. The grandfather threw the coca leaves as I’ve described in the book and his predictions turned out to be extremely insightful. Olympia’s grandfather who was a member of the Kallawaya was patterned after this gentleman. But the real Olympia was a very talented medicine woman/shaman as well.

What is the relationship between Nick and Bernie supposed to signify?
I’m not sure. But I kept going back to the refrain, “write from the heart,” and I wanted to be honest. I wanted the relationship to reflect honor, commitment, love and devotion in this life as well as a universal spiritual connection and I believe I accomplished that. The kind of love between them is either “agape” or “philia” in the Greek and I’m not sure which one best describes it. I think that he is like a priest or teacher to her. I tried to make that clear in the book.

Can you articulate an over-all theme of the book?
Brotherhood! And service. I believe we are all connected, that the indigenous peoples of the world are moving into an era where their voices will be heard and we will realize the importance of their contribution; that we must strive for peace and brotherhood among nations. Maybe that sounds corny, but I believe it will someday happen.

What advice can you give beginning writers today?
Learn the craft and stick to your vision! Take yourself very seriously even if others do not. It takes courage to put yourself, your beliefs, all that you are – out there for others to view and take pot shots at, so you need to develop a thick skin. Whatever the finished product is, it is, after all, your “baby.”

Thank you, Sue, and best of luck with When the Eagle flies with the Condor.
Posted by Lisa J Yarde at 10:26 AM