This week, we're welcoming historical fiction author Sophie Perinot. Her debut, THE SISTER QUEENS is set in 13th century England and France.  Sophie is here to talk about the novel and give away a copy. Remember, leave a comment for your chance to win. Here's the blurb: 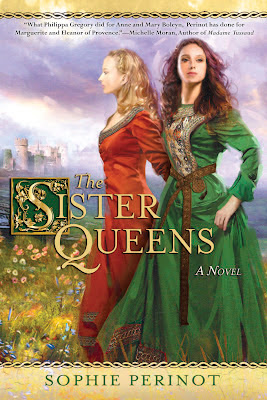 Raised together at the 13th Century court of their father, Raymond Berenger, Count of Provence, Marguerite and Eleanor are separated by royal marriages—but never truly parted.


Patient, perfect, reticent, and used to being first, Marguerite becomes Queen of France. Her husband, Louis IX, is considered the greatest monarch of his age. But he is also a religious zealot who denies himself all pleasure—including the love and companionship his wife so desperately craves. Can Marguerite find enough of her sister’s boldness to grasp her chance for happiness in the guise of forbidden love?

Passionate, strong-willed, and stubborn, Eleanor becomes Queen of England. Her husband, Henry III, is neither as young nor as dashing as Marguerite’s. But she quickly discovers he is a very good man…and a very bad king. His failures are bitter disappointments for Eleanor, who has worked to best her elder sister since childhood. Can Eleanor stop competing with her sister and value what she has, or will she let it slip away?

Why a book about sisters?
I’ve always been a sucker for stories about sisters, right back to the March sisters.  I suspect that’s because I am half of a pair of incredibly close sisters myself.  My first childhood memory is of my sister coming home from the hospital and we have been best friends ever since.  We were even college roommates.  I know with certainty that my relationship with my sister has been formative in my life.  If she had never existed I would not be the same person I am today.  These types of very primary relationships interest me because they are timeless.  The best themes in historical fiction are timeless aren’t they?

Why these sisters?
I stumbled upon the daughters of Raymond Berenger, Count of Provence, by chance.  I was researching a project that is currently shelved, and there they were in a footnote in a book on the history Notre Dame de Paris (Marguerite’s image is carved over the Portal Rouge there).  According to the footnote all four of these sisters had made politically significant marriages yet I had never heard of them.  I wondered how such women could have largely slipped through the fingers of history.  And, to be frank, the fact that they had made me angry.  So, I started a manila folder with their names on it and vowed to come back and tell their story.  The Sister Queens is the result of that vow.

When I sat down to frame my novel I had to make decisions about what to include and how to focus it.  Ultimately, I decided to weave together the stories of the two eldest sisters—Marguerite who became Queen of France, and Eleanor who became Queen of England—not only because the marriages they made were more significant than those of their younger siblings, but because of their particularly close bond.  Despite being separated by the English Channel for long stretches of time, Marguerite and Eleanor were able to maintain a life-long friendship and their mutual devotion helped each to navigate the challenges posed by love, war, political intrigue and betrayal.
Although your sisters were the daughters of the Count of Provence, their mother’s family was very important to their lives and stories.  Tell us a little bit about the Savoyards.
The Savoyards were the equivalent of celebrities in the High Middle ages.  Beatrice of Savoy (Marguerite and Eleanor’s mother), had eight brothers who together represented a considerable amount of political, territorial and marital power.  As with celebrities today, hyperboles were used to describe the Savoyards in their own time.  For example, one of Marguerite and Eleanor’s uncles, the warrior-priest Guillaume, Bishop-elect of Valence, was lauded as a “second Alexander” by medieval chroniclers.  In addition to political savvy and military skill, members of the house of Savoy were also renowned for their personal attractiveness.  This combination—competence and looks—created a sort of buzz around them.  People wanted to be like the Savoyards, and people (even kings and popes) wanted to be seen with them.

The linchpin of The Sister Queens is the relationship between Eleanor and Marguerite of Provence but you also explore each woman’s relationship with her husband in great depth.  Why?
These relationships were absolutely central to the lives of my sister queens. Queenly power depended on marital harmony.  Whatever we may think about this fact in the 21st century, the power and influence of these 13th century royal women depended heavily on the state of their relationships with their kingly husbands.  Yes, each sister—and particularly Eleanor who had an array of Savoyard kin as advisors—carved out her own sphere of political influence at her husband’s courts.  But ultimately they needed to be on good (or at least not bad) terms with their kings.  A queen’s rupture with her husband could mean a devastating loss of power and even imprisonment (think of Eleanor of Aquitaine).  Even Eleanor and Marguerite’s rights to see their own children depended on the goodwill of their husbands.  This is one of the reasons why, later in the book, when Eleanor is given custody and control of her children as Henry prepares to go and fight in Gascony she is so greatly moved, and declares “here is a thing more important than the governance of England” (and mind you she has also been given the regency in his absence).

Human beings, whatever the century, have needs for love and companionship.  I believe that most of us (male or female) hope to have a mutual-supportive relationship with our spouse.  This was true in the 13th century as well.  Yes, marriages, particularly those involving members of important noble houses, were arranged for political and inheritance reasons rather than for love.  But it does not follow that couples who entered into such marriages were not also seeking love and companionship.  After all, this was the golden age of the troubadours—ideals of courtly love, valor, and sexual pleasure were celebrated everywhere.  Many couples who made standard arranged marriages were in fact very happy.  Marguerite and Eleanor’s own parents, Raymond Berenger and Beatrice of Savoy, are a good example of this, and the girls grew up with that example before them.  It seems clear to me that both women left Provence hoping not only to be good queens and wives but to be happy in their marriages.

You say in the author bio at your website that you left the practice of law to pursue creative endeavors including writing – do you have a creative passion most readers might not know about?
I do indeed.  If you were to sneak a peek into my workspace in Virginia you’d notice that only half is a traditional writing space (desk, bookshelves, file cabinets).  The other half is a glass studio complete with torch and exhaust hoods.  This is where I do my Flameworking.

Flameworking (also called Lampworking) is an age-old process for making one-of-a-kind glass beads.  This is accomplished by heating glass rods to their melting point (about 1,700 degrees Fahrenheit for the glass I use) in a flame and then fashioning a bead of the desired shape and style using hand tools as well as the force of gravity.  You will never truly appreciate “round” until you have formed a bead by hand on a constantly turning mandrel, lol.  Perhaps not surprisingly, this is a hobby I share with my sister.  We decided to learn it together as adults.  We actually went to “camp” to get started.  It was a blast.

Thank you, Sophie, and best of luck with THE SISTER QUEENS.
Posted by Lisa J Yarde at 10:35 AM