Fashionable People of the Regency --Time for a Re-assessment?

It may seem odd on a blog devoted to Unusual time periods to  even mention the Regency but when I was researching my latest His Unsuitable Viscountess, I came across an interesting fact — there are no modern biographies of the women who ran the Ton (i.e. The Lady Patronesses of Almack’s) during the point when the Regency was at its height. When I started investigating the lives of these women  my views of fashionable women in the Regency were turned upside down upside down and my jaw was literally on the floor. 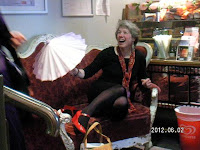 It would be tempting to take them at face value and consider them to be the Regency equivalent of Paris Hilton orany number of modern celebrities who were famous for being famous. I will admit to doing this prior to doing the research. After all I have read countless Regency romances and such women had to be there because of an accident of birth. And everyone knows that women could not vote et  etc. However the more I dug, the more interesting they became.  These are the women who single-handedly changed the nature of men’s fashionable evening dress  (Brummell is generally given the credit, but if the Lady Patronesses had taken against his attire, they would have not allowed in Almacks. Equally Dorothy Lady Nevill disputes it was Brummell in any case.) and introduced a variety of dances such as the quadrille, waltz and polka as well as a number of Scottish reels. Who were they really?  Fashionable for being fashionable? Women of privilege, certainly but they were also influential beyond mere fashion. I would argue they are ripe for more serious consideration.

Lady Jersey was the senior partner in one of the leading London banks, Childs which she had inherited from her grandfather. She served in this position from 1806 -1867 and therefore would have been privy to rumours about certain members’ financial situation. She was also an active political hostess and regularly held salons. She is credited with introducing the quadrille. If someone deserves a proper biography,  Lady Jersey certainly does.

Countess (later Princess) Lieven was the wife of the Russian ambassador and is credited with introducing the German waltz.. She was tireless in promoting Russia’s interests in the United Kingdom.  She was considered much more influential than her husband. Her salon was reputed to be the listening and observational post of Europe. She played a key role in the establishment of modern day Greece and Belgium. Again, there is no modern biography. In fact the whole role that Britain and Russia played in the establishment of Greece is an under researched area of 19th century history.

Lady Castlereagh, the woman who famously shut the doors of Almack’s on Wellington was the wife of the British Foreign minister who was responsible for holding the coalition which ultimately defeated Napoleon together. She travelled everywhere with her husband and was a noted  political hostess. She was also related to most of the Irish aristocracy.

Mrs Drummond-Burrell was a prominent member of  Scottish aristocracy. A number of Scottish reels bear her name.

Margaret Craven, Lady Shefton was the wife of the one of the founders of the infamous Four In Hand Club. Among other things, she sponsored Mrs  Fitzherbert  (George IV’s secret wife) in society. She was an intimate of the Prince Regent’s set.

Lady Cowper (nee Lamb) was a member of a prominent political family.  Her brother was Lord Melbourne, the prime minister and she had a long affair with and later married Lord Palmerston.

As you can see the women had extensive knowledge of the political  scene and were more than simply pretty faces. They were not fashionable simply because they had pretty faces, foreful personalities or knew how to manipulate the media. They had connections and were not afraid to use them to advance their various causes. It is through their influence, rather than in spite of it, that Almack’s was able to command such a place in Regency society. It is about time there were modern biographies of these women which re-assess their place in shaping modern British society.

Michelle Styles writes warm, witty and intimate historical romance in a wide variety time periods from Roman and Viking to Regency and Victorian. Her latest, His Unsuitable Viscountess which features a successful Regency businesswoman whost make a marriage of convienence in order to safeguard the family bvuiness under the terms of her step-father's will is published in August by Harlequin Historical in the US and Mills and Boon in the UK. You can read more about Michelle's books on www.michellestyles.co.uk
Posted by Michelle Styles at 1:15 AM