This week, we're pleased to welcome author Piper Huguley with her latest novel, THE PREACHER'S PROMISE. Join us again on Sunday for an author interview, with more details about the story behind the story. The author will offer a free copy of The Preacher's Promise .  Be sure to leave your email address in the comments of today's post or Sunday's author interview for a chance to win. Winner(s) are contacted privately by email. Here's the blurb. 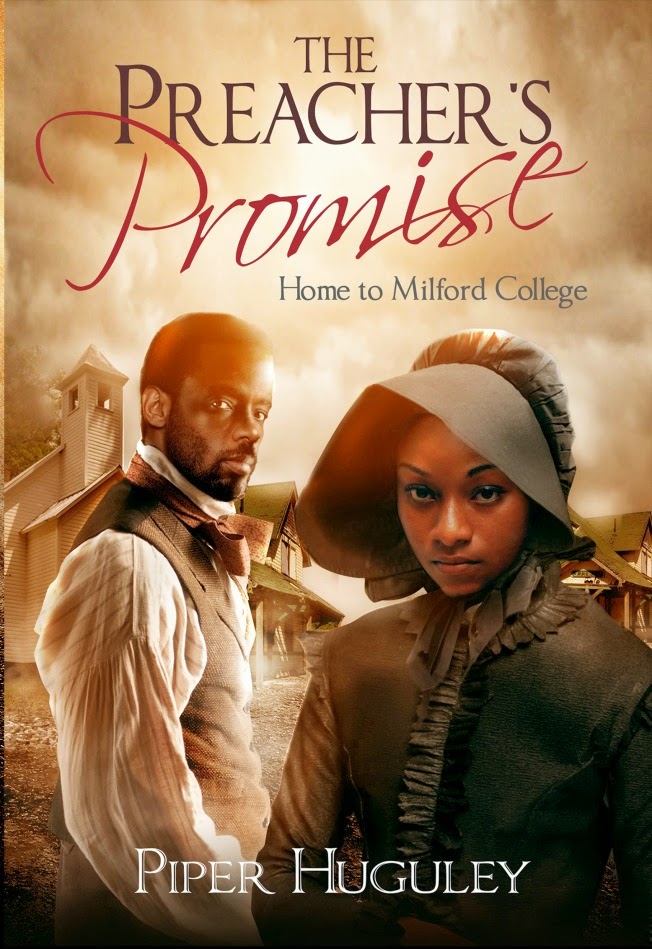 1866 – Oberlin, Ohio
Devastated by her father’s death days after her triumphant graduation from Oberlin College, Amanda Stewart is all alone in the world. Her father’s unscrupulous business partner offers her an indecent proposal to earn a living. Instead, to fulfill a promise she made to her father, she resolves to start a school to educate and uplift their race.  Sorting through her father’s papers, she discovers he had carried on a mysterious correspondence with a plantation in Milford, Georgia. She determines to start her teaching work with the formerly enslaved. However, when she arrives, the mayor tells her to leave.

Virgil Smithson, Milford’s mayor, blacksmith and sometimes preacher man with a gift for fiery oratory, doesn’t want anything to do with a snobby schoolteacher from up North. On top of everything else, the schoolteacher lady has a will hard enough to match the iron he forges. He must organize his fellow formerly enslaved citizens into a new town and raise his young daughter alone. Still, his troubled past haunts him. He cannot forget the promise he made to his daughter’s mother as she died—that their child would learn to read and write.  If only he didn’t have secrets that the new schoolteacher seems determined to uncover.

To keep THE PREACHER’S PROMISE, Amanda and Virgil must put aside their enmity, unite for the sake of a newly-created community in a troubling age, and do things they never imagined. In the aftermath of the flood that was the Civil War, God set his bow upon the earth to show love and understanding for humankind. To reflect God’s promise, these combatants must put aside their differences and come together--somehow.

**An Excerpt from The Preacher's Promise**

The school master would be the one to find out Virgil was the very last person in this hamlet of six hundred or so God-fearing souls who should be the mayor. Even as he approached the platform, his heart pounded at being found out.
But when he and March rounded the corner to where the once-a-day train dropped off cargo and people and chugged on to Savannah, there was no schoolmaster waiting on the platform.
Instead, on the train bench, sat the most beautiful lady he had ever seen.
He would have been no less surprised if a colorful parrot or macaw from one of the Milford grandchildren’s picture books came and lit on the wooden bench.
March took in a deep breath and he put his hand on her shoulder to steady her. His little daughter trembled at the sight of the lady.
His own stomach pitched around like ash at the edge of the fire. The lady leaned forward to regard them both. Her skin was the medium brown color of cooked oatmeal, the kind someone else made and not him, since he tended to scorch it.
And she flashed a smile to them with small, even teeth of the pearliest white.
Her cheeks had dimples that sunk in so charmingly he would have sworn his heart flipped upside down inside of his chest.
But almost as spectacular as she was in face, she was surrounded by yards and yards of black dress material, a dress so big and wide with hoopskirting, she tamed it down with small dainty hands as she stood to greet him.
Her black bonnet bobbed in kind as she greeted them with a pleasantly voiced “Good Day to you.”
“She’s so pretty.” March breathed in.
She must be the schoolmaster’s wife. Such a beautiful lady must be married to a high-up man like a schoolmaster. Where was the schoolmaster? No one emerged and instantly, he was made a fool in front of this beauty. He would have to speak to confirm it.
“Ma’am. We’re here to meet the schoolmaster. Is he ’round this way?”
She regarded him with large eyes that resembled the candy chocolate drops Mrs. Milford kept in a big jar in the parlor. Her eyes were merry. “Are you Virgil Smithson?”
“I am.”
He did not put out his hand as it would not be appropriate to shake hands with another man’s wife. He had a daughter to raise and did not want to start trouble with the schoolmaster first off.
“I’m Amanda Stewart.”
Virgil nodded. A nice proper name. “And your husband is getting your trunks?” Although it made no sense, a trunk should have been unloaded with them, but he saw nothing.
“I have no husband, sir. And I have no trunk.”
“Your black dress?”
“For my father. Lawrence Stewart. I’m his daughter, Amanda. I’ve come to be the schoolteacher.”
A rush of blood came into Virgil’s ears and his heart threatened to beat right out of his chest.
“You? A schoolteacher?”
The lady, she said her name was Amanda? She rearranged her big skirt, big like how Mrs. Milford’s used to be, and put her gaze on him. Something about her eyes, made her look as hopeful a little girl as March. “Yes, thank you Mr. Smithson. I’ve just finished the course at Oberlin College in Ohio. I’ve been my father’s pupil for many years before that. Let me assure you, I’m well qualified.”
“We wanted a man. Where is he?” Virgil blurted out and red heat blossomed onto his neck and face. She was sure to see it, no matter the deep brown of his skin tone. “Oh. So sorry for your loss.”
The look on her delicate features etched deep pain. If she had been punched in the gut, she would have looked as hurt.
He wanted to collect her up and tell her it would be all right. “I’m sorry for your loss, miss.” And he was sorry, but there was some terrible mistake.
“Thank you.” She pulled a delicate white hanky out of a skirt pocket within the big skirt and wiped at her nose with it.
The whiteness of her hanky contrasted sharply with the deep jet of her gown and Virgil almost forgot his daughter in his discomfort until March said, “Pretty lady teacher.”
And before he could stop it, Amanda Stewart bent down to talk with March, her big wide skirt spreading out into the dusty wooden platform. “Hello, I’m Miss Stewart.”
“Pleased to meet you, Miss Stewart.”
She bestowed that smile of hers on his little daughter and a connection knit itself between the lady and his child. No. Time to cut this off. He took March’s hand in his. “The community sent for a male teacher, Miss.”
Amanda stood and faced him again. This time he was surprised that the tip of her bonnet just about measured up to his chin. She carried herself much bigger than that. Or maybe it was her clothing. “You are mistaken, sir. The missive said you needed a teacher. I can provide that service.”

Learn more about Piper G Huguley, the author of the "Home to Milford College" series. The series traces the love stories at a small "Teachers and Preachers" college in Georgia over time, beginning with the love story of the founders. Book one in the series, The Preacher's Promise, was a semi-finalist in Harlequin's So You Think You Can Write contest, and a quarter-finalist in the 2014 Amazon Breakthrough Novel Award contest. The prequel novella, The Lawyer's Luck, and The Preacher's Promise will be independently published in July 2014. The Mayor's Mission will be independently published in the fall of 2014.

Huguley is also the author of "Migrations of the Heart," a five-book series of inspirational historical romances set in the early 20th century featuring African American characters. Book one in the series, A Virtuous Ruby won the Golden Rose contest in Historical Romance in 2013 and is a Golden Heart finalist in 2014. Book four in the series, A Champion's Heart, was a Golden Heart finalist in 2013.


Piper Huguley blogs about the history behind her novels at http://piperhuguley.com. She lives in Atlanta, Georgia with her husband and son.