Excerpt Thursday: FALLING FOR HER CAPTOR by Elisabeth Hobbes

This week, we're pleased to welcome author ELISABETH HOBBES with her newest release, FALLING FOR HER CAPTOR. Join us again on Sunday for an author interview, with more details about the story behind the story. One lucky visitor in the United States will get a free copy of Falling for Her Captor. Be sure to leave your email address in the comments of today's post or Sunday's author interview for a chance to win. Winner(s) are contacted privately by email. Here's the blurb. 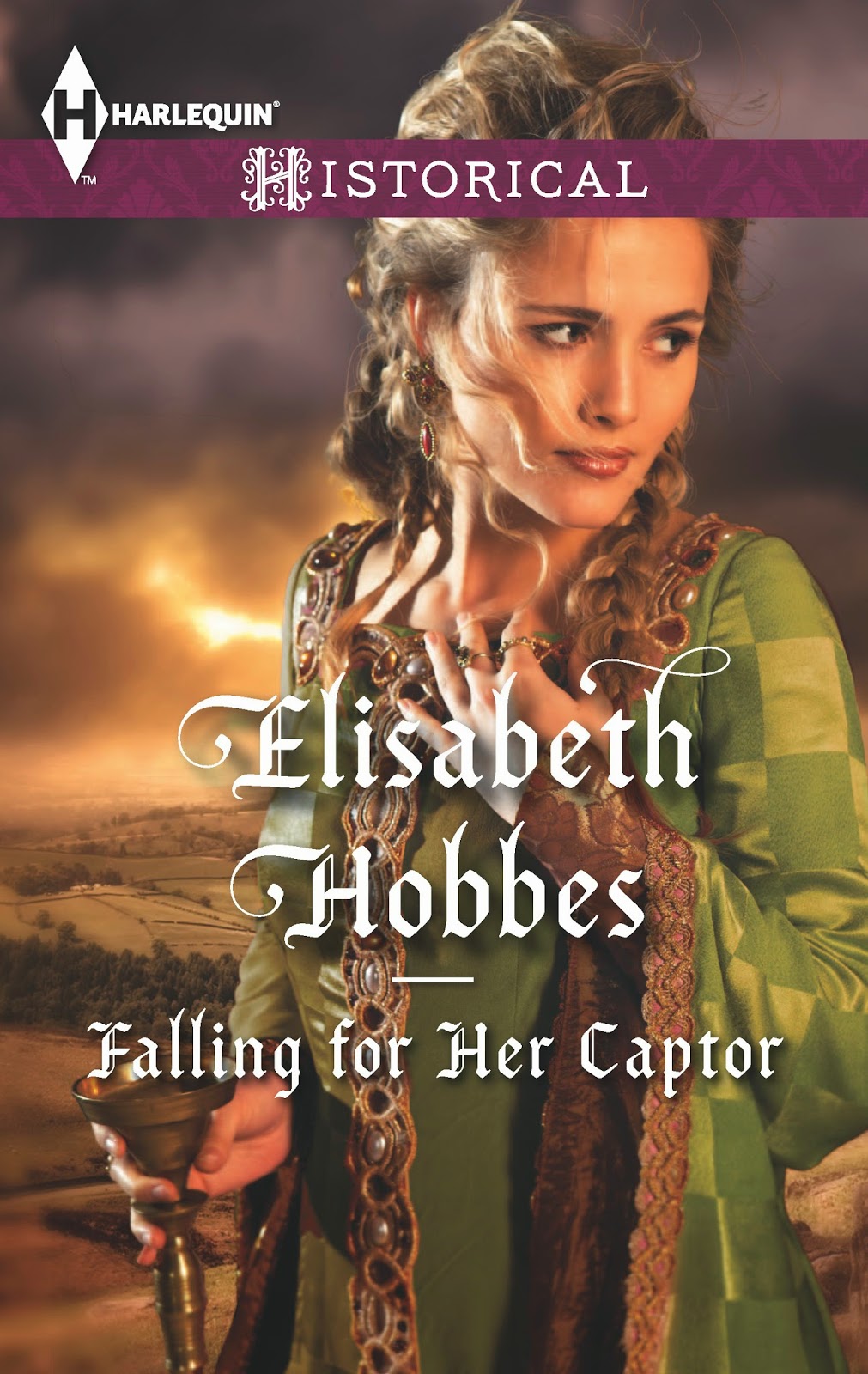 "Set me free. Say I escaped, or that you never found me."

Kidnapped heiress Lady Aline of Leavingham has surrendered any hope of rescue when a mysterious figure casts her assailant aside. But it's soon clear Aline's savior has no intention of setting her free—he's sworn to deliver her to the Duke of Roxholm, her family's enemy!

Sir Hugh of Eardham has never seen anything quite like Aline's beauty and fighting spirit. There's no doubt he's tempted more to protect her than keep her bound. But could this loyal knight ever break his oath of allegiance for Aline's sake?

** An Excerpt from Falling for Her Captor **

The sun had set by the time they stopped in the shelter of a high rock face. It was still not far enough, but the horses were beginning to stumble on the loose ground. Duncan went to gather wood for the fire, and Jack began preparing dinner. Hugh made some unnecessary adjustments to Bayliss’s bridle and saddle, checked the contents of the seat box and kicked the wheels of the cart before he finally admitted to himself there were no more pretexts for ignoring Aline.
‘Will you come out, please, my lady?’
There was no response. Hugh cleared his throat and stopped himself in the act of smoothing his hair back. He was about to stalk off when Aline climbed through the curtains. The sight stopped him in his tracks. Her hair was free over her shoulders and she had changed into the blue dress. It was too loose, but Aline had gathered it at the waist with the belt and the billowing folds hinted invitingly at the contours beneath. The wide neckline revealed the delicate hollow where neck met collarbone, soft and oh, so tantalising.
Hugh’s scalp prickled and his stomach flipped. He knew he was staring, and that she was waiting.
‘Lady Aline,’ he began hesitantly, feeling as awkward as a youth propositioning his first bar wench, ‘I ask forgiveness for my behaviour earlier. I was rude and it was unwarranted.’
Before Aline could speak a soft whimper of terror broke the silence. They exchanged a glance of alarm. Hugh took Aline by the arm and pulled her round the corner after him.
They both stopped short at the sight before them. Jack had been skinning and boning a brace of rabbits and the scent of blood had attracted a wolf. The animal must have been starving and desperate, because the rangy beast had crept closer into the camp and had now backed Jack against the wall of rock. It paced back and forth in front of him, snarling. Whenever the boy made a move it snapped its teeth and pawed the dirt.
‘Get back inside,’ Sir Hugh ordered Aline. He pushed her towards the cart before turning to Jack. ‘Throw it the bloody rabbit!’ he ordered.
The boy was frozen to the spot. He stood holding the carcass as if in a trance, not even aware of the crossbow that lay on the log next to him. The animal was confused by the shout and turned; emitting a low growl, as if unable to decide which man seemed the most likely threat. It turned back to Jack and bared its teeth, transferring its weight as though preparing to attack.
Sir Hugh took his dagger out of its sheath and with a roar crossed the ground between them. He made a feint at the animal. It turned and tensed, then leapt forward, hitting him square in the chest and sending him flailing painfully to the ground.
Above all else there was the smell: an intensely sweet stench of blood and rotting meat. Then there was the heat: the wolf’s breath, wet and overpowering on his face. A small part of Hugh’s mind was amazed that it had registered such an irrelevant detail at such a time, as though his mind was storing up memories while it still had the chance. His heartbeat pounded in his ears, almost obliterating the shouts of alarm and the whinnying of horses that seemed to come from a great distance. The wolf snarled and snapped viciously at his face, its weight pinning him down. Claws scratched at his torso through the thin shirt and he felt searing pain.
Hugh covered his face with his left arm, the leather sleeve of his greatcoat offering some protection. With his right hand he swiped out blindly with the dagger. The animal’s fur was too thick to penetrate and the blade had little more effect than a feather. Enraged, the wolf shook its head with a force that knocked the dagger from the man’s grasp. Hugh dug his heels into the ground and twisted his body, his hand reaching desperately towards where the dagger lay but falling short. The creature lunged down at him again with a snarl, its grey muzzle wrinkled and teeth bared. Hugh felt a dull pain rip across his chest and he bellowed with shock and anger.
The pain was not yet intense; he knew that would come later—if he survived the attack. He was dimly aware of wetness down the side of his neck, which he knew instinctively must be his blood. At the scent of the blood the beast raised its head and gave a deep, triumphant howl. Waves of panic coursed through Hugh’s body. He abandoned his hunt for the dagger and pushed his hands against the animal’s chest with the strength he had left. His arms felt heavy and he could barely make his fingers work as they brushed through the wiry fur. The edges of the world became a grey blur. A thought passed through his mind: What a stupid way to die.
He closed his eyes, bracing himself for a final assault.
No pain came. Instead he felt heaviness as the animal slumped onto him. It twitched frantically, then lay still. A moment passed as Hugh’s brain caught up with the sensations he was feeling. He opened his eyes and craned his neck. The wolf was lying across his body, a crossbow bolt protruding from one eye. Spittle and blood dripped from its open jaws. He raised himself up onto his right elbow but it gave way immediately and he felt the first true pulse of agony course through his body.
Hugh collapsed back onto the dirt, his head spinning, and turned to look in the direction the bolt had come from. Instead of Duncan or Jack, as he was expecting, Aline stood white-faced, with the crossbow reloaded and now aimed menacingly at his heart.

and her blog http://elisabethhobbes.co.uk
Posted by Lisa J Yarde at 8:00 AM