Author Interview & Book Giveaway: Christy K. Robinson on MARY DYER: FOR SUCH A TIME AS THIS

This week, we're pleased to welcome author CHRISTY K. ROBINSON with her latest novel, MARY DYER: FOR SUCH A TIME AS THIS, the second in two volumes about the Dyers. The author will offer one autographed paperback edition to a US postal address, or one Kindle version to US and other countries.  Be sure to leave your email address in the comments of today's author interview for a chance to win. Winner(s) are contacted privately by email. Here's the blurb. 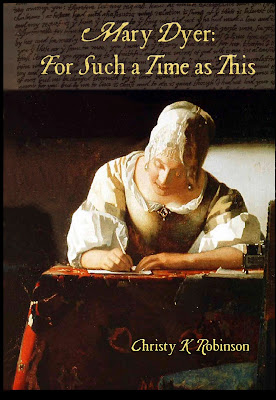 In the second of two volumes, Mary Dyer: For Such a Time as This, Mary and William Dyer return to war-torn England and lay a foundation for liberty that resonates in the 21st century. Why did beautiful, wealthy Mary Dyer deliberately give up her six children, husband, and privileged lifestyle to suffer prison and death on the gallows?


What inspired your story?

I’ve always been interested in history, church history, and spiritual matters, having been educated in church schools and worked at nonprofits and as a church music director for many years. I had heard disparaging comments about Anne Hutchinson and Mary Dyer, that they were Antinomians, and I started reading about what “against the [Old Testament] Law” meant. Mary Dyer was a very distant ancestor, and I read that she had been hanged by the Puritans because she was a Quaker (incorrect). All I could find on Anne and Mary were the same clichés, over and over, from 19th-century historians, and I was skeptical of them because they were illogical. Many genealogical sites and books have fanciful myths about Mary’s background, and some outright whoppers, like Mary’s supposed royal lineage. There was little about Mary, until I began investigating her husband, friends, and enemies, and reading archived court records from her time. Mary “materialized” from there.

How have you worked real history into the story?

Actually, it was the other way around—I worked fiction into the facts. Out of all the characters I used in the two books, fewer than five were invented. I researched every real good and bad guy and created dossiers on them, and instead of 2D cartoon heroes or villains, they became 3D people I respected. I pored over 17th-century midwifery regulations, cookery, and astronomy, geology, meteorology, and epidemiology events and charted them by year because the people of the 17th century believed that unusual events were direct messages from God. Speaking of religion, there were Separatists, Puritans, Anglicans, closet Catholics, Jews, Quakers, Seekers, Antinomians, and more—in an era where Church of England was the state religion—and I had to learn the differences. I read broadsheets and chapbooks, and skimmed some of the books of their time. I did extensive image searches for fine art, looking for little details and background symbols that spoke of their surroundings. I learned the politics of both England and New England—and found many parallels to today. Working with their Julian calendar (not our Gregorian one), I found motivations and events that no one else has ever noticed until I wrote it. That is an incredible feeling!

OK, you’ve got the historical part down. But where was the fiction in historical fiction?!

Histfic has to have a story that moves through beginning, middle, and end. I had to invent scenes and conversations, of course, to “show, not tell” the story, and I had to leave out 80 percent of my research—ouch.  As a magazine and philanthropic feature writer for years, creating fiction was a real killer for me. But the rave reviews say I succeeded. What I couldn’t put in the novels sees daylight in a nonfiction companion book to the novels, my historical blogs, and the Facebook pages and groups I’ve created. I started the Dyer blog in 2010 as a platform for my future books, and as I track keywords, phrases, and concepts, I’ve seen that novelists are using my research to create their own stories about Mary Dyer. Stories that are more imagination than fact, but still use my research and plot devices. (Darn right, I’m jealous.)

What’s so unusual about the setting?

Not many authors have covered both sides of the Atlantic in the same story. What spurred the Great Migration and settlement of American wilderness, the Puritan-versus-Anglican-versus-Quaker thread, the personal tragedies and triumphs, all combine to tell an epic story. I’m not the writer that James Michener was or Edward Rutherford is, but this story is similarly huge, and needs to be remembered and understood. Why? Because history repeats itself. In the 21st century, our civil rights are under constant attack in local and national courts and a singular vision of morality is promoted in legislatures. Mary and William Dyer were the ancestors of all of us in Western civilization when it comes to freedom of conscience and strict separation of church and state. Whether you believe in a religious system or not, you have rights to believe and act according to your conscience because of the Dyers. 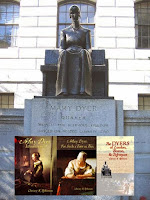 
For more (much more!) information on William and Mary Barrett Dyer, visit Christy’s Dyer blog, starting with its most popular article, Top Ten Things You May Not Know About Mary Dyer.
Posted by Lisa J Yarde at 8:00 AM