This week, we're pleased to welcome author ELISABETH HOBBES with her latest release,  THE BLACKSMITH'S WIFE. One lucky visitor will get a digital only copy of The Blacksmith's Wife - this giveaway is open internationally. Be sure to leave your email address in the comments of today's author interview for a chance to win. Winner(s) are contacted privately by email. Here's the blurb. 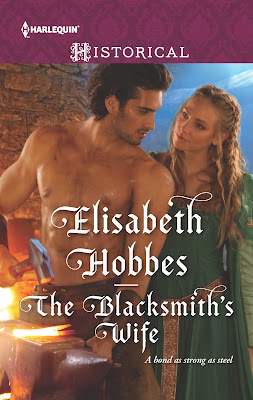 A passion forged from fire

Rejected by her favoured knight, Joanna Sollers knows she will never love again. Especially when the man she’s now forced to marry is none other than her beloved’s half brother!

For blacksmith Hal Danby, marrying Joanna makes his lifelong dream of entering the Smiths’ Guild possible, even if the secrets in his past mean he’ll forever keep his distance. But everything changes with one stolen night, and in the arms of his new bride, Hal wonders if this loveless arrangement could transform into something real...

Praise for The Blacksmith’s Wife

‘A passionate story that unfolds with a great plot and well defined characters. It is one that you will remember and a little out of the ordinary for its content.’

‘I loved the historical accuracy and detail, and the plot gives you great characters (some you'll love, some you'll enjoy hating!), excellent settings, and the desire to bang heads together as two people don't let on what they really think.’

‘The attention to setting and period details mean that you quickly become immersed in the tale - and this tale has everything you need: tensions and misunderstandings, a growing passion between two very engaging protagonists, and a dog called Simon. It's brilliant.’

Can you summarise your latest book for us?

Joanna is in love with Sir Roger, a knight who has no intention of in marrying her.  When Roger’s brother, illegitimate blacksmith Hal discovers this, he insists Roger ends the assignation.  The unforeseen consequence of this is that Joanna now needs a husband.  Her uncle, the master of the guild Hal has ambitions to join, decides Hal would be the perfect candidate to take his unwanted niece off his hands in return for possible entry into the guild.

Despite neither Hal nor Joanna wishing to marry, and both knowing Joanna is in love with Roger, they feel they have little choice but to agree.  They move to Hal’s village on the North York Moors to try build a life together.  As they begin to grow closer, secrets and misunderstandings threaten to destroy their prospective happiness.

Are your books linked in any way?

None of them are linked in a series, though the idea for the plot of The Blacksmith’s Wife came out of the fact that in my second book, A Wager for the Widow, the heroine was faced with a choice of two men: the hero who she loved but who had hurt her and a knight who she did not love but who would have presented a better opportunity.  Eleanor made the right choice but it made me wonder what might happen to a heroine who chose to marry the ‘other’ man in that situation and how the unwanted husband could turn out to be the right choice in the end.

I am currently editing my fourth book and after that I am considering whether to tell Sir Roger’s story and see if he can be redeemed enough to earn a happily ever after.

How do you go about researching for a new story?

Once I have an idea I research dates to find out if there are any particular events that the story would fit into. For A Wager for the Widow I chose the 1290s because of the opportunity for Will to make his fortune in the wine business.  For The Blacksmith’s Wife I wanted a time when my heroine Joanna would meet the knights that were travelling round the country taking part in tournaments and close enough to the Black Death (or Great Pestilence as it was known at the time) to have orphaned her.

Once I’ve chosen my period I like to use visual images as inspiration for clothing, hairstyles, buildings and so on.  Because I set The Blacksmith’s Wife in my hometown of York I spent a lot of time visiting the many buildings from the medieval period that still stand and taking photographs, walking the snickelways (lovely word) and alleys that Joanna and Hal would have walked, and (very happily) visiting a couple of the pubs that would have been there at the time.  My sister works at the Jorvik Viking Centre and has friends and colleagues who spend their lives surrounded by artefacts and documents so I was very lucky to have ready access to ask any questions I needed answering.

Do you draw on any personal experiences when writing?

In this book more than my others I drew on my love of York and the North York Moors to create the setting.  Joanna is unwilling to move to Hal’s village but once she’s there she can’t help fall in love with the landscape.  I don’t get back as often as I would like and share Hal’s emotional response on seeing the rolling vastness of the moors after a long absence.  Especially when they’re covered in purple heather they are breathtaking.

Although I don’t have a dog, I do think giving dogs human names is very amusing.  Naming Joanna’s dog Simon came about accidentally (the uncle was named before the dog even existed in the story) but coincidentally it’s the name a friend and I agree is the best name for a dog so it was great to be able to give Hal and Joanna our in-joke.

Do you believe in love at first sight?

No.  I believe in attraction at first sight and that lightning bolt feeling of ‘wow!’ when you meet someone new.  Just like Joanna and Hal discover, love takes longer to develop and comes when you really get to know and understand someone.

Are you doing anything special to celebrate the book's release?

I’ve recently joined Knutsford Literary Society and in the week The Blacksmith’s Wife is released I will be hosting an author Q&A session and reading excerpts.  I love meeting readers so I’m really looking forward to the event.