This week, in partnership with Historical Fiction Virtual Book Tours, we're pleased to welcome author SUSAN WITTIG ALBERT with her latest release, THE GENERAL'S WOMEN. Here's the blurb about the novel. 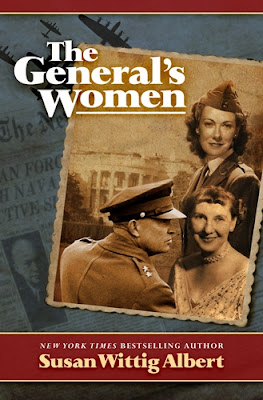 A compelling story of love, betrayal, and ambition by New York Times bestselling author Susan Wittig Albert, The General’s Women tells the story of two women--Kay Summersby and Mamie Eisenhower—in love with the same man: General Dwight Eisenhower. Set during the chaotic years of World War II, The General’s Women tells the story of the conflicted relationship between General Dwight Eisenhower and Kay Summersby, his Irish driver/aide, and the impact of that relationship on Mamie Eisenhower and her life in Washington during the war. Told from three alternating points of view (Kay’s, Ike’s, and Mamie’s), the novel charts the deepening of the relationship as Ike and Kay move from England (1942) to North Africa (1942-43) to England, France, and Germany before and after the Normandy landing (1944-45). At the end of the war, Ike is faced with the heart-wrenching choice between marrying Kay and a political future. The story continues into the post-war years, as Ike (returning to Mamie) becomes Army Chief of Staff, president of Columbia University, Supreme Commander of NATO, and president of the United States. Kay, meanwhile, struggles to create a life and work of her own, writing two memoirs: the first (Eisenhower Was My Boss, 1948) about her war work with Ike; the second (Past Forgetting, 1976) about their love affair. An author’s note deals with the complicated question of the truth of Kay’s story, as it finally appears in the posthumously-published Past Forgetting.

Praise for The General's Women

"The General's Women is an engrossing and humanizing account of a love that blossomed during wartime and scandalized a nation... A historical novel that is sympathetic, satisfying, and heartbreaking." —Foreword Reviews

"A mature, gripping emotional drama... The arc of this multifaceted novel follows the three main characters [Ike, Kay, and Mamie] and a host of secondary ones through the war and back into civilian life. At every point Albert smoothly incorporates an obviously vast amount of research into a tale of raw emotional conflict that can make for some wonderfully uncomfortable reading." —Kirkus Reviews

"A brilliant work of biographical fiction that will fascinate WW2 history fans. It tells the remarkable true story of General Dwight D Eisenhower and his relationship with his Irish-born driver and secretary, Kay Summersby, and with his longtime wife Mamie. It faithfully shines a light on the hidden relationship of the man behind the D-Day landings and what he got up to while 3,000 miles from his wife. A must read!" —Kieron Wood, author of Ike's Irish Lover: The Echo of A Sigh


**Q&A with Susan Wittig Albert**
We'd like to thank Susan for being a guest this week at Unusual Historicals as she shares details about her latest novel, The General’s Women.

What was the inspiration behind this novel?

Years ago, I happened on Kay Summersby’s memoir, Past Forgetting. Not long after, I saw the TV mini-series, Ike: The War Years, which starred Lee Remick as Kay. I loved her for her bravery. I wanted to know more about her than either the memoir or the film could tell me. I especially wanted to understand her relationship to Eisenhower and know more about what happened after the war. Did Ike really intend to divorce Mamie and marry Kay, as President Truman insisted? If that was his intention, why didn’t he follow through? What compelled her—and him—to do what they did?

I had a lot of questions that needed answers—and for me, the best way to answer a question, always, is to tell a story about it. This story just begged to be told.

How long did the research take and when did you know you had compiled enough to finish this novel?

The story I wanted to tell is a true story about real people, so I felt I needed to know what happened, in as detailed a way as possible. I spent five or six months reading the basic source material, as background. I started with Kay’s two memoirs, one written right after the war (Eisenhower Was My Boss), the other (Past Forgetting) published posthumously in 1976; for her postwar life, I used newspaper archives.

For the war itself, I read the dramatic and detailed Liberation Trilogy, by Rick Atkinson. For what went on in Eisenhower’s command, I relied heavily on the chatty, gossipy contemporaneous diary kept by Harry Butcher, Ike’s naval aide (My Three Years with Eisenhower)—fascinating reading. For Eisenhower, Jean Edward Smith’s Eisenhower in Peace and War seemed to tell the most coherent story—and to portray Ike’s flaws as clearly as his strengths. For Mamie, I read her granddaughter Susan’s biography, Mrs. Ike, plus contemporaneous newspaper reports. My sources are documented in the book’s notes.

Once I finished studying the background material, I knew enough to write the first page. For me, that’s when the serious research begins, because the writing forces me to confront what I don’t know. When I’m writing, I go from the page to the sources and back again, adding detail, fact-checking, adding more detail. And all the time, of course, I discover new sources by reading footnotes and bibliographies. In that sense, the research is never finished until the novel is finished.

Did you discover any surprises during your research?

I was nearly done with the book when I accidentally discovered a recently published biography of Kay, published in Ireland and written by Kieron Wood, an Irish lawyer who lives not far from Kay’s family home in County Cork. Kieron and I became email friends and he shared several enlightening insights into Kay’s life—things he had learned from his Irish sources. I was glad to have his information in time to incorporate it into the story itself. And glad that he agreed with the way I told Kay’s story.

Another surprise grew on me as I worked through the book and began to realize the enormous efforts made by Ike’s postwar staff and his family to cover up his relationship with Kay. They tried—pretty successfully, as it turned out—to erase Kay from his life and to discredit her account of their affair. For instance, I learned that the affair threatened to become an issue in the presidential campaign of 1952 and there was some interesting behind-the-scenes maneuvering to keep it quiet.  I guess I shouldn’t have been surprised at that, given the cover-ups we’ve seen in politics over the years. But I was.

What makes your major characters most compelling?

Wartime love affairs are probably a dime a dozen. Men and women are away from home and seeking comfort wherever they can find it under the urgent threats of war. But Eisenhower was not just any soldier: he was the top military commander in both the North African and European theaters of war. He had an unequalled reputation for integrity and square-dealing, and when he went to the White House his approval ratings would be higher than any other president. Mamie Eisenhower was widely admired for her staunch support of Ike during the war and an irreproachable icon of middle-class values during her eight years in the White House.

As a love triangle, this is classic—and pretty darn compelling.

Who is your favorite author and why?

One of my favorite writers of biographical/historical fiction is Tom Mallon—and my favorite work of his is Watergate: The Novel. We all know the Watergate story: there is no longer any mystery about the plot. There’s Dick Nixon, of course, on his way to total collapse by the end of the book. And Pat Nixon, who is having a (fictional) affair that steadies her enough to survive the holocaust of her husband’s second term. But there’s also Howard Hunt and Rose Mary Woods, Elliot Richardson, Fred LaRue, and (my absolute favorite) Alice Roosevelt Longworth, an iron-willed old broad who will steal your heart. We know the plot, of course. But it turns out that we don’t know any of these characters until Mallon gives them to us, in all their many contradictory dimensions. I reread Watergate regularly, just to remind myself that such books can be written.

What advice would you offer other authors of fiction?

It’s the same advice I have for anyone who wants to write anything. Find a story, stay with it until you know it better than anyone else in the world, then write it. Do that again. And again. As many times as it takes. 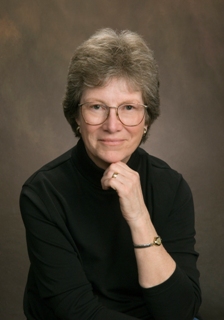 A NYT bestselling author, Susan's books include biographical fiction (A Wilder Rose 2013, currently under film option; Loving Eleanor 2016; and The General's Women 2017). Her mystery fiction includes the bestselling China Bayles mysteries; The Darling Dahlias; the Cottage Tales of Beatrix Potter; and the Robin Paige Victorian/Edwardian mysteries written with her husband, Bill Albert. Working together, the Alberts have also written over 60 young adult novels. Susan's most recent nonfiction work includes two memoirs: An Extraordinary Year of Ordinary Days and Together, Alone: A Memoir of Marriage and Place. Her earlier nonfiction work includes Work of Her Own, a study of women who left their careers, and Writing From Life: Telling Your Soul's Story, a guidebook for women memoirists. That book led to the founding of the Story Circle Network in 1997. She has edited two anthologies for the Story Circle Network: With Courage and Common Sense (2004) and What Wildness Is This: Women Write about the Southwest (2007). She currently serves as editor of StoryCircleBookReviews and co-coordinator of SCN's Sarton Women's Book Awards. She and Bill live in the Texas Hill Country, where she writes, gardens, and tends a varying assortment of barnyard creatures. For more information, please visit Susan Wittig Albert's website. You can also find her on Facebook, Twitter, Pinterest, Google+, Goodreads, Amazon, and BookBub.
Posted by Lisa J Yarde at 12:30 PM