How do you express yourself when there are very specific rules? That's the crux of Chinese calligraphy--a limited set of brushstrokes, with an infinite number of ways they can be expressed. The art of calligraphy, called shu, is one of the four principal disciplines in Chinese culture along with painting, music, and strategy games. 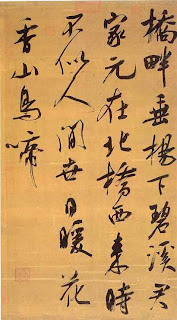 The order of the strokes is important when drawing Chinese characters, so a student must not only learn what a character looks like, but also the proper way to write it. 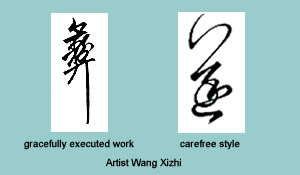 Calligraphy is considered to be the art form that is most revealing of character. Swordsmen, scholars, and statesmen were all expected to study calligraphy and, through it, learn both discipline and expression. Master calligraphers receive the same recognition an artist such as Da Vinci receives in Western culture. 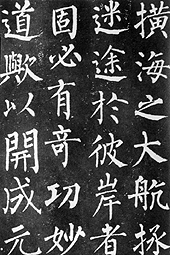 Rubbing of a work of master calligrapher Ouyang Xun (557-641) from the Tang Dynasty
It's said that the appearance of the writing can be appreciated the way you can appreciate abstract art. Without understanding what the characters mean, the audience should still be able to sense the energy and spirit behind the technique. Pablo Picasso and Henri Matisse declared that their work was influenced by the art of calligraphy. Perhaps by the concept of capturing the essence of an idea in a few lines and shapes? 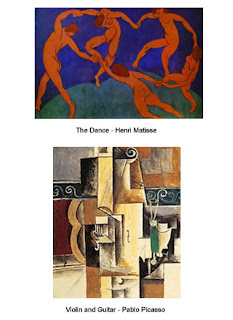 Can you see any connection?
When the shape and style of the words themselves are such a beautiful art form, it's no wonder that Chinese poetry and literature contains such rich symbolism!
Posted by Jeannie Lin at 6:00 AM