A magnificent man on a splendid stallion. Fiery Clara Seavers is determined to have them both. At nineteen, Clara is accustomed to getting her own way. But there's more to the handsome stranger than meets the eye. Jace Denby is a man of deep and troubling secrets--a man who can never promise her his love.

Clara is a rich man's daughter. Jace knows she's trouble, but he can't seem to keep his hands off her, especially when Clara seems so willing. It would be all too easy to fall in love with her. But Jace is a man on the run--a man who has to keep moving or die at the end of a rope.

Four Blue Ribbons! "Clara is a strong heroine who instantly feels like a friend, and Jace comes to a life as the perfect protective and loving hero. He puts Clara's safety before anything else. Every character is important in THE HORSEMAN'S BRIDE, a great ensemble piece. If you enjoy Westerns, you won't want to miss this one." ~ Romance Junkies

Five Spurs!!!!! "Elizabeth Lane has written an emotion packed story about the consequences of lies, the necessity of trust, and the strength of love. Not only did the reader get to catch up with characters from previous books, but the story takes place twenty years later in the series, when the Wild West was supposedly tamer. Ms. Lane's story demonstrates that human nature doesn't vary much, regardless of the century." ~ Love Western Romance

Tell us about yourself.

I'm a westerner by birth and upbringing. My grandparents lived like pioneers and my great-grandparents were pioneers. I grew up in a small town, in a family of people who loved the outdoors. Maybe that's why writing Western romance comes so naturally to me. But I can and do write other things. My earliest books were big historical sagas. Then the market changed and I found a new home at Harlequin Historicals. Counting a couple of ghost writing projects, I'm coming up on 35 books. Twenty-eight of those books have been for Harlequin--three of them contemporaries, the rest historicals.

Tell us about your new book, THE HORSEMAN'S BRIDE.

My new historical, THE HORSEMAN'S BRIDE, is an April 2009 release from Harlequin Historicals. Although the story can stand on its own for new readers, those of you who've met the Seavers and Gustavson families in THE BORROWED BRIDE and HIS SUBSTITUTE BRIDE will be happy to know that Clara, now 19, finally gets her own story.

Why did you set this story in 1919, instead of the traditional Old West?

My first reason was practical. Clara, my heroine, was a newborn in THE BORROWED BRIDE (set in 1899) and a young child in HIS SUBSTITUTE BRIDE (set in 1906). She deserved her own story. But first she needed time to grow up. There are other reasons as well. I find the early 1900s fascinating. The world was changing so fast, with the old ways and new ways existing side by side. If you've seen the movie Legends of the Fall you'll understand why I love this time period for a Western setting. I also feel strongly connected to this time because I've known people who were alive then. Jace and Clara could have been the ages of my grandparents.

What can your readers expect next?

I'd planned to end this series with THE HORSEMAN'S BRIDE. Then a stunning, strong-willed woman strode into the last chapter of the book, and I knew I wasn't finished. Those of you who've read, or will read THE HORSEMAN'S BRIDE, will be happy to know that Ruby gets her story. Look for my next "Bride" title in late 2010 or early 2011. 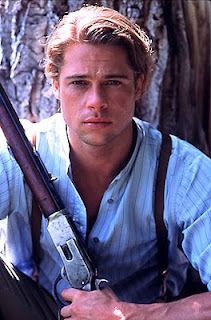 After that, I'll be leaving Dutchman's Creek, Colorado for the northern California coast and a haunting post-gold rush story that I can't wait to write.

Thanks for stopping by, Elizabeth! She will be here all week to answer questions about her latest historical romance novel. In particular, what do you think of the 1919 setting? Does it evoke feelings of Legends of the Fall (featuring one very young and steamy Brad Pitt) or is it too "modern" for a western historical? I'll draw the random winner next Sunday. Void where prohibited. Best of luck!

From THE HORSEMAN'S BRIDE by Elizabeth Lane; Copyright ©2010.
® and TM are trademarks of the publisher. The edition published by arrangement with Harlequin Books S.A.
Posted by Carrie Lofty at 8:00 AM