What Surprised Me: Ancient & Medieval Prostitution

Prostitution has existed for so long that it's often call the world's oldest profession. The sale of sexual services is considered taboo in most societies, but this view was not always held in the past.

One of the projects that I'm currently working on is The Rule of Love, about the origins of the Kama Sutra. How's that for an unusual historical? In fifth century India, my protagonist learns lessons of sensuality, life, and love at an exclusive brothel run by his aunt. The Kama Sutra is more than a manual of sexual positions. It teaches proper behavior, and instructs the reader on how attain fulfillment of every goal in life, including sexual ones. A large portion of the text discusses the role of prostitutes in society.

Illustration from Kama Sutra
Centuries of Muslim leadership and the puritanical British Raj have influenced the modern India republic's conservative views of sensuality, but the country's past is very different. I was genuinely surprised by the unabashed view of prostitution the Kama Sutra takes. The sixth part of the Kama Sutra is devoted to their proper conduct; a how-to guide on the ways by which they could attract and keep lovers. The author considered prostitution a natural part of civilized society, which prevented marital affairs, with prostitutes providing their services for the general good.

At the time of the Kama Sutra, prostitutes at every level played an important role in society, as its artisans and used their wealth to fund social and religious projects. The text notes, "Having temples and reservoirs built, setting up altars on raised platforms to Agni, the fire good, giving Brahmans herds of cows and covered vessels, arranging...offerings to the gods, bearing the expenses involved in the money they earn, this is the concern of high-ranking courtesans who reap large profits."

The early Catholic Church struggled with the role of prostitutes. In the fourth century, St. Augustine, one of its most important figures, stated "If you do away with harlots, the world will be convulsed with lust." He took the view that would influence society up through the Middle Ages, that prostitution was a necessary evil. Having had a mistress for most of his youth, St. Augustine understood the power of lust.

Eight centuries later, his thoughts on prostitutes would influence the opinions of St. Thomas Aquinas. In his Summa Theologiae, Aquinas argued for the toleration of prostitutes in society, as in the state should allow fornication and prostitution for the sake of the common good. "Prostitution is like a sewer in a palace. Take away the sewer and you will fill the palace with pollution." 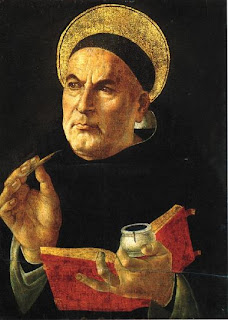 St. Thomas Aquinas
When I have written in medieval settings, the constant influence of the Church in my characters' lives placed constraints on their actions. It was strange to find that in an age typified by priests preaching sexual abstinence, even in marriage, St. Thomas Aquinas took a practical approach to prostitution: it was "...filthy and against the law of God," but that a prostitute should always be fairly paid for her services. "It is lawful for her to keep it and also to give it to charity even though it is acquired by an unlawful action...." But he also stipulated that prostitutes were bound to pay their tithes to the Church, "...only after the individuals in question have done penance."

Brothels soon flourished in every major city. In Paris, le roi des ribauds (the king of the ribalds) regulated the services of the city's prostitutes. Queen Joanna of Avignon established a town brothel rather than allow wholesale prostitution to go unregulated. In twelfth century London, King Henry II brought the "stews" or public baths used for meeting prostitutes, under government regulation. The London streets where prostitutes could be found were known by names like, "Lovelane, Cokkeslane, Gropec*nt Lane, and Codpiece Alley." Later, the Bishop of Winchester owned most of the brothels that developed along Southwark, leading to "Winchester geese" as a common reference for the prostitutes there.
Posted by Lisa J Yarde at 7:00 AM