What Surprised Me: The World of My Fantasies

While researching some of the locations in my stories, I followed a Google link for Yumen Guan (Jade Gate fortress). All of the sudden I found myself looking down upon the hollowed shell of a desert fortress.

A shiver ran down my spine. This was it. The picture of a place that was over thousand years old--what remained of the desert outpost at the edge of an ancient empire. 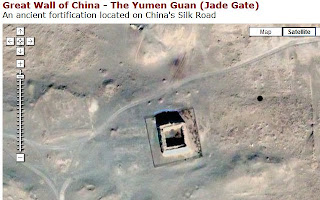 And I was looking at it.

I can't describe the feeling inside of me at that moment. I know it's not the same as being able to go to China, ride along the Silk Road, and touch the walls myself. But I was sitting at my desk and looking at a picture of something that existed way across the world. I felt connected.

We've all heard that the Great Wall of China is the only man made object visible from space with the naked eye. You've probably also heard that it's not true. But the adage is suddenly an appropriate one with satellite photos giving us views of places we may never be able to visit. 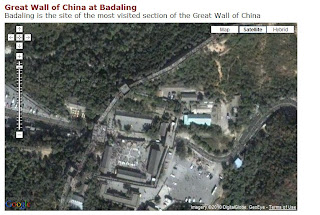 I've only been to China once and, since it was my first time, I took the standard tour--Beijing, Shanghai. The tourist stuff. I rode the bus to one node of the Great Wall. They took us to the pearl farm, the Forbidden City, the silk factory. I didn't realize that five years later I'd start writing books set in Changan (modern day Xi'an) and the Silk Road. I should have been going to those places instead of the modern cities and shopping centers the tour bus took us to!

So how do I write all those vivid descriptions of ancient buildings and grasslands and deserts? I could lie and say I have a stunning imagination, but really I cheat. I look at them. If you're researching an unusual setting or would just like to play armchair world traveler for a couple of hours or so, you might enjoy taking a look as well. There are sites that list locations all over the world for Google maps sightseers: http://www.satellite-sightseer.com/

Here are a couple of my favorite ways to location scout:

Google Earth
Google Earth enthusiasts have located various places and "bookmarked" them, so to speak. You can view them either online through the plug-in or you can download the Google Earth application and then open these .kml files. You can also search directly from Google Earth and mark two destination points. How else would I know how long it might take to travel from Yibin city to Chengdu? :) 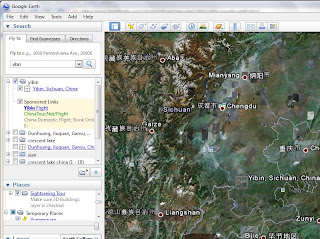 360 cities
Great way to get a panoramic view of buildings and other landmarks. I'm surprised by the number of locations people have photographed and contributed. 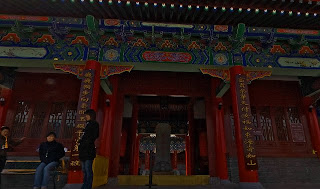 Click to see 360 panoramic view
At one point, I thought it would be too difficult to research specific places. I was planning to set my stories in a fantasy world based on China, but when I saw how beautiful the actual locations were, I knew I had to set the stories in Tang Dynasty China. Why make up a world, when the actual one is so fascinating!

I'm very, very grateful that people all over the world love taking pictures and that they're so avid about posting and sharing them where everyone can see. And I'm glad to by writing historical romances in the Internet age. Perhaps this "connectedness" will make unusual settings all the more in demand.
Posted by Jeannie Lin at 7:00 AM