Today we say the rich are born with silver spoons in their mouths. In the ancient world, they said the wealthy were born to the purple. This phrase alludes to the royal robes dyed with a precious shade of deep purple originally created by the Phoenicians in Tyre.

Tyrian purple was a hue worn by royals and conquerors including Alexander the Great. Romans had a great affinity for it too, and their bright white senatorial togas were bordered with a great purple band. Tyrian purple was not only a commodity, but also a status symbol. It may have even accounted for the assassination of Julius Caesar who wore the royal purple so often that his colleagues feared he intended to make himself King. 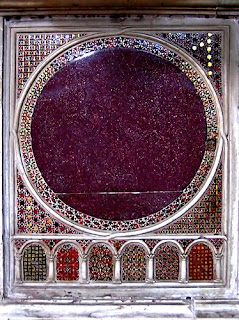 The true color cannot be accurately identified now; the best we can do is reconstruct it based on the surviving description of the ancients, but we do know that redder shades of purple were considered to be inferior. It was the darkest, richest purple that they prized, and this may have been achieved by dipping the fabric twice in two slightly different shades, one redder, one bluer.

Whatever the methodology, the purple dye itself was so expensive that it was worth its weight in silver. The salesman of a silken garment dyed properly in the stuff might be able to buy a small city with the proceeds. The reason it was so costly is because of its enduring quality, one that improved, rather than faded, with age. And also it was wildly expensive because of the process used to make it.

The source of the dye was the murex brandaris, which is a name for a spiny sea snail. While it's possible to capture one of these little gastropods and poke it until it excretes a defensive mucus containing at least one of the ingredients required to make the precious purple, milking the murex snails was entirely too labor intensive. To meet demand, millions of murex were harvested. More than a thousand shells were needed to make even one gram of dye.

The exact process by which the dye was made has not been perfectly reproduced to date, but it was described by Pliny and involved vats of rotting shellfish. The smell was so terrible that dye factories had to be built far away from population centers. Mountains of shells attest to their presence.

The heroine of my debut novel, LILY OF THE NILE, is Cleopatra Selene, daughter of the more famous Cleopatra VII of Egypt. Together with her husband King Juba II, Selene built several purple dye factories on islands off the coast of Mauretania. Perhaps unable to replicate the exact shade of purple invented by the Tyrians, they called their own Gaetulian purple after one of the native Berber tribes. Gaetulian purple was prized almost as much as the Tyrian variety and was probably responsible for funding many of Juba and Selene's building projects and cultural programs.

Stephanie Dray's debut historical fiction novel, LILY OF THE NILE, will release January 2011 from Berkley Books. The sequel is expected to release at the end of 2011. Both novels are set in the Augustan Age and feature Cleopatra's daughter.
Posted by Unknown at 7:00 AM