This week, we’re welcoming author André Jute whose title DREAMS is the first in his eight-volume COLD WAR, HOT PASSIONS series, focuses on three generations of embattled Russian and American families.  André is here to talk about the novel and offer e-book copies to THREE lucky winners in the following formats: MOBI for Kindle, EPUB for iPad/Nook/etc. or PDF/. The giveaway is open to worldwide visitors. Here's the blurb: 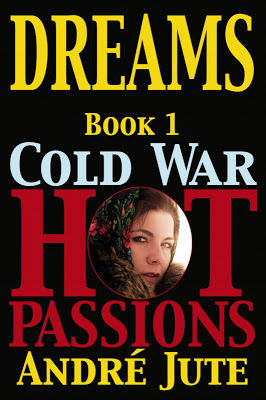 
Your huge, varied backlist tells us you can write an exciting story on any subject you choose. So why choose to give over twenty years of your life and career to writing a huge saga about the political rivalry between Russia and America?

As a novelist I don’t moralize. What matters about an idea — communism, capitalism, liberty, responsibility — for the novelist isn't right or wrong but whether his characters believe in it. So, while the political strife between the two great nations was important for almost a century, in that it could have caused us all to die in a nuclear holocaust and certainly shaped the world we now live in, what’s important to the novel and the story, to the writer and the reader, is that the characters believe sincerely in their version of salvation. Their actions arise from their beliefs, and instantly we have conflict and tension. That’s a story! The political strife is the background noise. A family saga by definition is about people. I've just selected people as my characters who happened to change history in a way which affects all of us, and will affect our children and grandchildren.

This isn't the first time you've written a novel about real people who influenced world history, who speak in your novel in their own recorded words. Don’t you find that working with a known outcome dilutes the tension of your story?

No, not at all. You’re right, I like working with accurate historical facts, and my historical characters speak in character and mostly in their own recorded words. But you’d be surprised at how much history is unknown even to educated people. I receive letters from people who’re amazed that nobody saw what I see, even though they were working with the same known facts. As for tension being diluted, it works the other way. The reader knows, perhaps only vaguely, what happened, and after a while realizes that I don’t play games with history, that I honor it. But the reader doesn't identify with the historical events, the reader roots for the character. The reader knows that the historical events against which the character’s story plays out were dangerous, sometimes lethal, to many of participants. The knowledge adds a frisson of expectation and vicarious terror: will the reader’s favorite character be one of the fortunate ones, or one of the victims? As you say, I've done it before, in THE ZAHAROFF COMMISSION, in REVERSE NEGATIVE, and earlier this year in AN ELECTION OF PATRIOTS.

DREAMS is the first volume of eight in COLD WAR, HOT PASSIONS, but already it is clear that the saga isn't just about people at the center of the action in Moscow and Washington in war and peace shaping our world, but about a monstrous decades-long conspiracy to shape our world in a particular way. Are you a conspiracy nut?

I’m far too over-educated and well-read and — it must be said — cynical to be a conspiracy nut. I know for a fact that the world is not shaped by conspiracies but by foul-ups. It is true that COLD WAR, HOT PASSIONS is about a monstrous conspiracy, but it isn't an evil conspiracy, it is a conspiracy for good, for peace. Of course, that doesn't make it any less dangerous and wearing for the conspirators, because their ruthless opponents aren't keen on peace at all. The spread of COLD WAR, HOT PASSIONS, roundabout two thousand pages to record the interactions of the ten intertwined families over 75 years, and the many important female characters, has allowed me to observe the effects of decades of stress and fear on the wives and partners, and the children too. Space and time is really important to this set, if you see it as one story with many branches rather than many self-contained stories set against the same period, which it also is. The standard length “big thriller”, the way I write it anyway, has so much action that you never get a chance to ask, “What happened to the families?” In COLD WAR, HOT PASSIONS there is space to answer the question without ever letting up on the tension.

With so much going on in your story, even if it is eight volumes, how do you manage not to lose the literary class which your novels clearly possess?

Heh-heh. I’d be delighted to lose any pretension to literary quality. I wanted to be a popular entertainer, perhaps tour the clubs as a stand-up comic. Unfortunately, I turned out not to be common enough. But there are advantages to writing for the quality end of the market, where I’m well loved by the cognoscenti. At least I don’t have to repeat myself ad nauseam, write the same book again and again because “your readers demand it”. To take an obvious example immediately to hand, I can take the time and the space lovingly to handcraft and polish an eight-volume family saga, even if it takes more than twenty years.