Today, we have a peek at the newest release from long-time Unusual Historicals contributor BLYTHE GIFFORD, Whispers at Court, out now from the Harlequin Historical line.  And Blythe will be back on Sunday for an interview about the book.


One lucky visitor today or on Sunday will get a free copy of Whispers at Court. Be sure to leave your email address in the comments for a chance to win. Winner(s) are contacted privately by email.

The second Royal Wedding story, set again in the 14th century English court, it shows a little-known slice of medieval history:  the treatment of noble hostages during the Hundred Year’s War between England and France.  Blythe posted more about that here: http://unusualhistoricals.blogspot.com/2014/10/the-battlefield-and-beyond-noble.html

King Edward’s daughter Isabella ultimately married Enguerrand de Coucy, a French hostage and WHISPERS AT COURT centers on the romance between their two fictional friends.  Here’s a glimpse of the story:

Lady Cecily scorns the French hostages held at court. Treated as honoured guests, the men play at love games – and Cecily fears that her mistress, the Princess, might be disgraced. War-weary chevalier Marc de Marcel wants only to return home. Uncertain whether his ransom will ever be paid, he makes an unlikely alliance with enticing fire and ice Cecily. He’ll help her keep the Princess safe from ruin if she’ll help him escape. A pact which could lead them into a scandal all their own...

RT Book Lovers gave it 4-stars, saying “Gifford creates memorable characters and stories with such passion and authenticity that they capture the hearts of fans worldwide."
**An Excerpt from Chapter One of WHISPERS AT COURT** 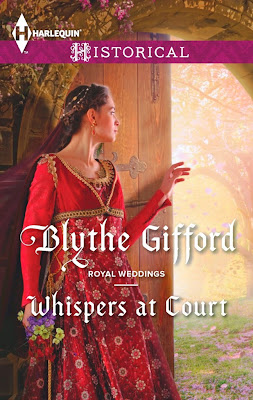 The Court of Edward III, King of England, at Westminster


The minstrels’ horns signaled the beginning of a new dance.  Cecily searched the room, hoping for rescue.  She should join the dance with a partner who might become a husband, not with a hostage.


And the hostage had not offered his hand.


Well, then, if she were trapped, she would attempt to be gracious.  She pursed her lips.  “You are from the Oise Valley?”


A frown, as if the reminder of home had angered him.  “Yes.”


“And do they dance there?”


“On occasion.  When les goddams give us a pause from battle.”


“Why?”  Did they wish to curse the English with every name?


“Because every sentence they utter contains the phrase.”


She stifled a smile.  Her father, indeed, had been known to swear on occasion.  She could imagine that he would have had many more occasions in the midst of battle.


But she held out her hand, imperious as the princess could be.  “If you can dance, then show me.”


“Is this part of a hostage’s punishment?”


“Then, pray, demoiselle, tell me your name, so I may know my partner.”


He shamed her with the reminder.  Anger had stolen all her senses.  She was acting like a common serving girl.  “Lady Cecily, Countess of Losford.”


The surprise on his face was gratifying.  He looked at her uncovered hair and then glanced behind her, as if expecting an earl to be hovering close behind.


“I hold the title.”  At once a matter of pride and sadness.  She held it because the rest of her family was gone.  Held it in trust for a husband she did not yet know.


His nod was curt, yet he held out a hand, without hesitation now, as if that had been his intention from the first.


Surprise, or something deeper, unfamiliar, stirred when she put her fingers in his.  She had expected his hands to be soft, as so many of the knights’ had become now that war was over.  Instead, his palm was calloused; his knuckles scraped.  Wounds from today’s joust, she thought at first, but in the passing torchlight, she saw he carried scars of longstanding.


They joined the carol circle.  On the other side, Lord de Coucy and the king’s daughter Isabella smiled and whispered to each other as if the evening had been prepared for their amusement.  That man showed not a whit of resentment at his captivity, while beside her, de Marcel glowered, stubbornly silent as the music began.


They could not have been more unlike, these two.


Carol dancing, with its ever-moving ring of dancers holding hands, did not lend itself to talk.  And he moved as he spoke, with precision, without excess, doing only what was necessary.


She wondered whether this man enjoyed anything at all.


Certainly he did not enjoy her.  When the dance was done, he dropped her hand quickly and she let go a breath, suddenly realizing how tense she had been at his touch.


He stood, silent, looking around the Hall as if searching for an escape.  And yet this hostage, this enemy could, if he wanted, lift a goblet of the king’s good wine, fill his belly with the king’s meat and his ears with sweet music played by the king’s minstrels, all the while alive and comfortable while her father lay dead in his grave.


“What did you do,” she asked, “to earn the honor of substituting for the other hostage?”


“You were defeated in battle, you killed my…countrymen, yet the King welcomes you to his court where you have food and wine aplenty and nothing to do.  It seems a generous punishment for defeat.”


“A prison with tapestries is no less a prison.”


And yet her father would come home no more.  “You must pay some penalty.  We conquered you!”


As the words escaped, she saw his expression change.


“No!  Not conquered.  Never conquered.  We were betrayed by cowards.  Lord de Coucy and I were not among them.  We would have fought until the last goddam was dead.”


This time, it was a curse he hurled.


“So you hate the English,” she said.  Blunt words, but he was a blunt man.


“As much as you the French,” he answered.


“I doubt that,” she said, sheer will keeping her voice steady.  “But since you detest us and disdain the king’s hospitality, I hope your time here will be short.”


He bowed then, the gesture a mockery.  “In that, my lady, we are in accord.” 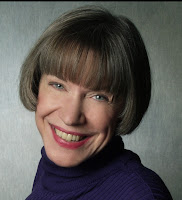 After many years in public relations, advertising and marketing, Blythe Gifford started writing seriously after a corporate layoff. Ten years and one layoff later, she became an overnight success when she sold her first book to the Harlequin Historical line.  Since then, she has published ten books, primarily set in England and on the Scottish Borders, most revolving around real historical figures and events.  For more information, visit www.blythegifford.com
Author photo Jennifer Girard

Posted by Blythe Gifford at 6:00 AM