One lucky visitor will get a digital copy of LIBERTY BOY – this giveaway is open internationally. Be sure to leave your email address in the comments of today's author interview for a chance to win. The winner will be contacted privately by email. Here's the blurb… 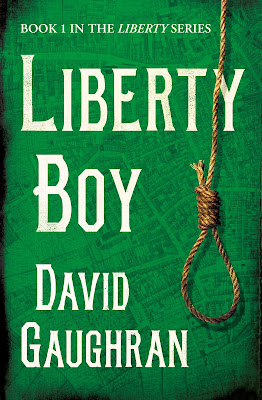 Dublin has been on a knife-edge since the failed rebellion in July, and Jimmy O'Flaherty suspects a newcomer to The Liberties - Kitty Doyle - is mixed up in it. She accuses him of spying for the English, and he thinks she's a reckless troublemaker.

All Jimmy wants is to earn enough coin to buy passage to America. But when the English turn his trading patch into a gallows, Jimmy finds himself drawn into the very conflict he's spent his whole life avoiding.

Can you tell us a little about Liberty Boy? It's a little different to your previous books.

Liberty Boy is set in Dublin after yet another failed rebellion: the 1803 Rising. The story stars Jimmy O'Flaherty – a market trader who is trying to keep his head down, stay out of trouble, and save enough money to escape Ireland. In fact, most of the action centers around one place, Thomas Street in Dublin. My previous historical novels had a whole cast of characters and/or covered lengthy time periods, attempting some kind of epic scale, but this time around I really wanted to narrow the focus. I think the book takes place over just three weeks.

And what was going on in the background at this time? Why that specific period?

I decided to set something in my home country for a change and I was drawn to the lesser-known 1803 Rising. Everyone in Ireland knows the name of the leader, Robert Emmet, and how he was executed afterwards at such a young age. But I’d never heard that lots more men were hung in the three weeks leading up to that, almost one every day in the same spot. I was immediately intrigued about that and started imagining what life on the street would have been like with this gallows being erected right there in the city, in the middle of a busy street, looming over everyone as they went about their daily business.

It was a show of force by the British administration ruling the country at the time, and it must have been very intimidating. Thousands had been in arrested in the aftermath of the rebellion and justice back then was a different beast: those charged with treason had a perfunctory trial lasting a few hours and were executed the very next day. People wouldn't have been sure who was going to be next, or how long it would continue.

Losing didn’t help! More seriously, the 1803 Rising never had a good reputation when I was learning history in school. We lost in 1916 too, but that set in motion a series of events that led to Irish independence a few years later. There were many other failed uprisings before, but most are generally viewed as decent efforts which failed because of bad luck, or English treachery, or a simple lack of firepower - but no deficit when it came to bravery. 1803 is generally considered in less charitable light: its leader was naive, or foolhardy, or it was poorly planned and a shambles in the execution too, or that his men were ill-disciplined or ran away, and so on. I was also intrigued by this, not least when I found out that wasn’t the real story.

Is it difficult to challenge preconceived views of history?

Sometimes you can have great success with that – Wolf Hall being a classic example. But I don’t know if that’s the case here. I’m skeptical anyone has strong enough opinions about 1803 for me to have to work so hard to overcome them, and that’s not really the approach I take anyway. A lot of history is contentious, especially Irish history. However, that doesn’t necessarily have to make your job as a novelist harder. It might sound like a high-grade cop out, but I was wondering how to handle all these different interpretations of what happened – particularly when it took us nearly two hundred years to figure it out – when I realized I could just have the characters argue about it!

How is that not a cop out?

Maybe it is, but look it at another way: there would have been a range of opinions on what the rebels were doing. Not everyone was a nationalist seeking independence, and even out of those that were, some were arguing that it wasn’t the right time to revolt. On top of all that, there would have been jealousies and little fiefdoms amongst the rebels themselves and I’m sure a few of the older hands resented such a young, relatively inexperienced, leader.

And there was great confusion about what happened anyway, one which has never been fully resolved even with the benefit of history and hindsight. At the time, many of the ordinary people of Dublin wouldn’t have trusted the official news sources, and would have relied more on word-of-mouth, itself inherently susceptible to gossip and rumor and exaggeration, as well as various personal agendas. Which is why I wanted to have a main character who is generally distrustful, and, while he is no fan of the English, he is ambivalent about the rebels and, especially, how they go about achieving their aims.

But he also has personal reasons for that stance… which ends up being forcefully challenged. 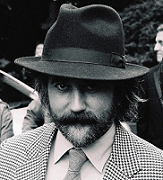 David Gaughran is Irish and lives in Dublin, where it rains every day and conversation is a sport. He is the author of the historical adventures Liberty Boy, Mercenary, and A Storm Hits Valparaiso, as well as bunch of other stuff too. Visit DavidGaughran.com to find out more, and to sign up to his mailing list.

Learn more about David at: